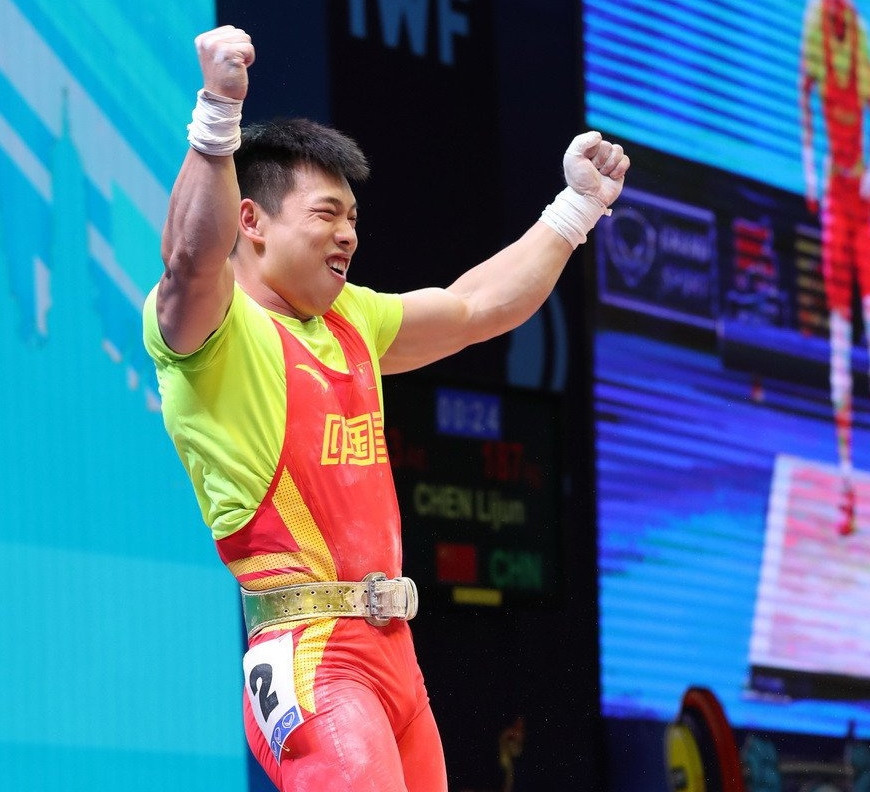 Consistency was the key as Chen came out on top with 337kg after finishing third in the snatch with 150kg and second in the clean and jerk on 187kg.

Compatriot Feng Lyudong was the overall runner-up having lifted a total 333kg in the weight category's B session, held earlier in the day.

His best snatch lift of 153kg was good enough for the gold medal and he ranked fourth in the clean and jerk with 180kg.

Feng attempted to break the snatch world record of 155kg, but was unable to manage 156kg.

Rounding off the total podium was North Korea's Pak Jong Ju, who broke the world record in the clean and jerk with a lift of 188kg to finish on 330kg overall.

The previous global mark was held by Chen and stood at 185kg.

The silver medallist in the snatch was Turkey's Daniyar Ismayilov with 150kg, while the clean and jerk bronze medal went to 20-year-old Uzbek Adkhamjon Ergashev with a junior world record-breaking lift of 182kg.

In all, Ergashev broke his own world records seven times – twice in the snatch, twice in the clean and jerk and three in the total.

Reigning Asian champion Liao finished on 227kg overall, having come second in the snatch with 98kg, and managing a best clean and jerk lift of 129kg, bettering her own previous global mark of 128kg.

Her second-attempt success at 125kg proved to be enough to claim the two titles after Zhang failed at 126kg.

Zhang came second in the total with 222kg after winning the snatch with 99kg and ranking second in the clean and jerk with 123kg.

The Philippines' Hidilyn Diaz, a Rio 2016 silver medallist, completed the top three with 214kg, comprising 93kg in the snatch and a bronze medal-winning 121kg in the clean and jerk.

The third-place finisher in the snatch was Uzbekistan's Muattar Nabieva, who managed 96kg.

Action is due to continue tomorrow, with medals in the men's 73kg and women's 59kg events.