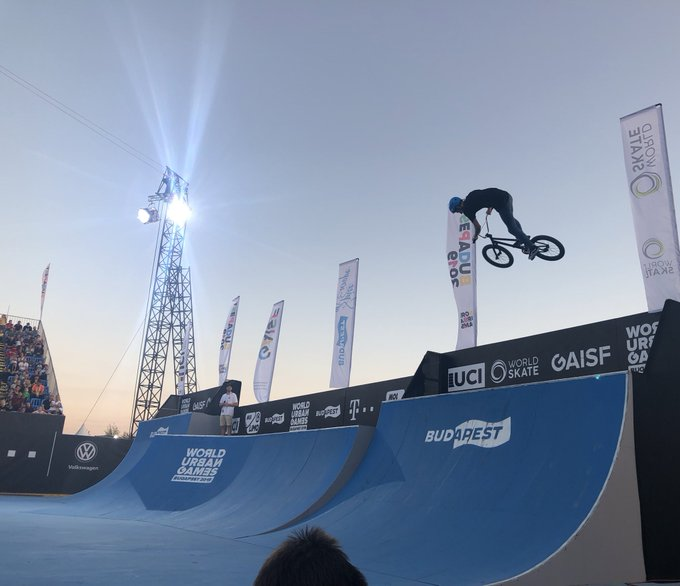 World number one Hannah Roberts justified her status as the athlete to beat by topping the women's BMX freestyle qualification standings on the opening day of the World Urban Games here today.

The first day of the inaugural Games saw finals qualification in several of the six sports on the programme.

Roberts is among the star names competing at the Games and the American enjoyed a strong start in Hungary's capital, Budapest.

Roberts achieved an average score of 84.25 points from her two qualifying rides in the women's BMX freestyle event.

The 17-year-old, who will be a medal contender when the discipline makes its Olympic Games debut at Tokyo 2020, was followed by Japan's Minato Oike.

Oike scored 77.60 to finish second in qualifying, while France's Magalie Pottier rounded off the top three on 72.10.

The same park was also used as the venue for the roller freestyle skating, with Spain's Maria Munoz heading women’s qualification.

She achieved a top score of 76.33 from her two runs, just 0.33 higher than Japan's Misaki Katayama.

France's Manon Derrien was also narrowly behind the leader, with her score of 75.33 confirming the medals will be closely contested.

Australia's Christopher Wellsmore rose to the top of the standings with a second run score of 83.33.

Russia enjoyed a strong start to the men's 3x3 basketball competition, doubling as the European Under-23 Nations League Finals.

The Russian team began with a 22-15 win over Romania in Pool A, before easing past Ukraine 21-10.

Romania bounced back from their loss in the opening match by clinching a dramatic 21-20 win over Poland to lie second overnight.

Belarus upset second seeds the Netherlands 17-15 in the first Pool B tie, before hosts Hungary won 21-16 against France.

The women's competition saw Russia earn two victories in Pool A to top the standings, including a hard-fought 21-19 win over France.

Pool B saw Hungary win 18-7 against Ukraine, while China were 22-14 winners against Poland.

Russia could be set for success in women's parkour freestyle with Alexsandra Shevchenko topping the qualification standings on 25.50 points.