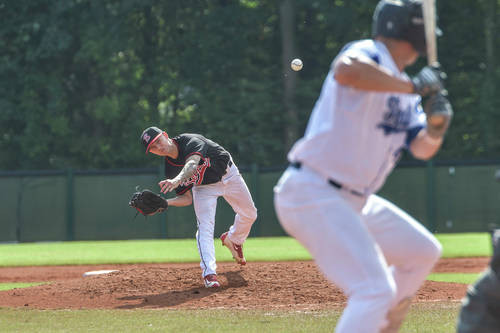 Italy made it five wins from five to top Group B as Britain's elimination from the European Baseball Championship was confirmed in Germany.

The Italians had already secured their passage to the quarter-finals with a 13-3 victory against Spain yesterday, but rounded out the group matches in Bonn with an 11-4 triumph against Belgium.

Spain finished second in the group, courtesy of a thumping 19-1 win against Austria, the match ending at Baseballpark Weyersberg in Solingen after six innings.

In the group's other match France won 23-0 against Croatia.

So... our chances of making the Quarter Final in this tournament is somewhat dependent on Germany beating the Czech Republic this evening... Never thought we'd be saying this but, your fan club just got bigger!

The Netherlands defeated Israel 13-4 in Group A, with both teams already assured of a place in the knockout phase.

Britain were eliminated from the tournament after losing their rescheduled match with The Netherlands 10-2.

The British had kept their hopes of progress alive with a 13-7 triumph against the already eliminated Sweden.

Their final hopes of advancing to the last eight rested on Germany winning against the Czech Republic, but the Czechs won 10-6 against the championship hosts.

The result means both teams progress to Friday's quarter-finals and Britain are left to fight out the minor classification places.

Tomorrow, Sweden face Austria, while Britain take on Croatia in the first of the play-off matches, to finish in ninth place.