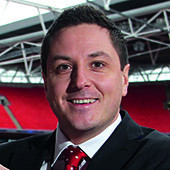 Amidst the euphoria of this summer’s cricket World Cup and Ashes series, a FIFA Women's World Cup, an epic Wimbledon finals weekend and Shane Lowry winning The Open on home territory you had perhaps have been forgiven for having blinked and missed the "One Year to Go" celebrations ahead of the 2020 Olympic Games in Tokyo.

But for those who did indulge in a spot of Olympic day-dreaming, a heady mix of evocative memories of Games gone-by and thoughts of what Tokyo might hold certainly stirred the emotions.

Given the relative proximity of London 2012 it’s still easy for those of us in the UK to reach back into the recesses to what remain relatively fresh memories of a Games that truly made Britain feel great. They are memories that can’t help but transport you back to what feels like happier times for our nation.

There is no doubt that sport has a unifying ability in a way that no other cultural genre can, and it is equally true - at least in our belief - that Team GB is one of the few sports teams that can create that feeling for an entire nation.

You only need to look into the make-up of the 378 athletes that are predicted to be wearing the red, white and blue of Team GB to see why it remains the UK’s most loved sports team. A uniquely diverse mix of sports and athletes, there is a reference point for everyone - at least one athlete whose story should resonate with someone, somewhere across the UK and even beyond these shores.

Now, with less than 365 days left until the Tokyo 2020 Olympic Games, Team GB’s ambition is to spread Olympic fever back across the country as the countdown to the next Games really kicks in.

Somewhat excitingly, given the ever-growing status of women’s sport, Team GB is on the cusp of qualifying more women than men in the British Olympic team for the first time ever, meaning there is much to be excited about with preparations for Tokyo 2020 well on track.

Three years ago at Rio 2016, Team GB won a record-breaking 67 medals, becoming the very team in the history of the Olympics to win more medals at the Games that immediately followed their host Games. Team GB also won gold medals in 15 sports - a greater spread of gold medals than any other nation, including the table-topping United States team.

Quite simply Rio 2016 signalled one of the greatest results in British sporting history, as Team GB finished second in the medal table, and maintained its status as the only team to have won a gold medal at every summer Games.

Replicating that success would be some achievement, but the British Olympic Association, who manage Team GB, have put in place the most comprehensive ever preparatory plans and facilities of any Games away from these shores.

A fully equipped preparation camp in Yokohama, on the outskirts of Tokyo, will see almost all of the athletes make their final preparations in Japan, as they come to terms with the time difference, the wonderful culture of the host country and the potential heat and humidity that a Japanese summer might hold.

In Japan, the local communities that surround our facilities in Yokohama, Kawasaki and Odaiba, have really embraced the British athletes and team. "Go GB" banners adorn the preparation camp sites, encouraging locals to adopt GB as their second favourite team, whilst the hospitality, warmth and friendship that has been extended to Team GB has grown a great affection amongst the British delegation to their Japanese hosts.

A cultural exchange programme with the City of Motamiya - impacted as a result of the Fukushima disaster - is inspiring Japanese and British schoolchildren alike to create ‘pen-pal’ friendships and practise their language skills and discuss the upcoming Games.

Through the summer a number of our sports have been in Tokyo testing facilities and enacting their own acclimatisation strategies. The constant view that comes back is of a city and country that is ready to host the Games, and an Organising Committee that will provide an Olympic Village and venues that will themselves make a nation proud, in much the same way Tokyo 1964 helped shape the outlook for Japan for decades to follow.

On the field of play, Tokyo 2020 will welcome five new sports to the Games, which we hope will help capture the imaginations of new younger generations - baseball/softball, karate, skateboarding, sport climbing and surfing.

The last month or so has been fascinating for Team GB as it was confirmed a women’s football team will compete in Tokyo while both men’s and women’s rugby sevens teams have also qualified for the Games. Gwangju in South Korea saw some impressive performances from Britain’s divers, including Olympic medallists Jack Laugher and Tom Daley among others, ensured seven spots for Team GB too and with swimming having taken centre-stage since, more quota places have been secured.

At the same time Team GB has launched its public campaign to bring the nation together in excitement, unity and pride ahead of Tokyo 2020 and this will run through the next year with further activations as teams get announced and the Games draw ever closer.

Whatever your sport, whoever you follow, even if sport isn’t ordinarily your thing, Tokyo 2020 has the unbound ability to grip a nation and bring us all just a little bit closer together again; and goodness, don’t we need a bit of that in Britain today.