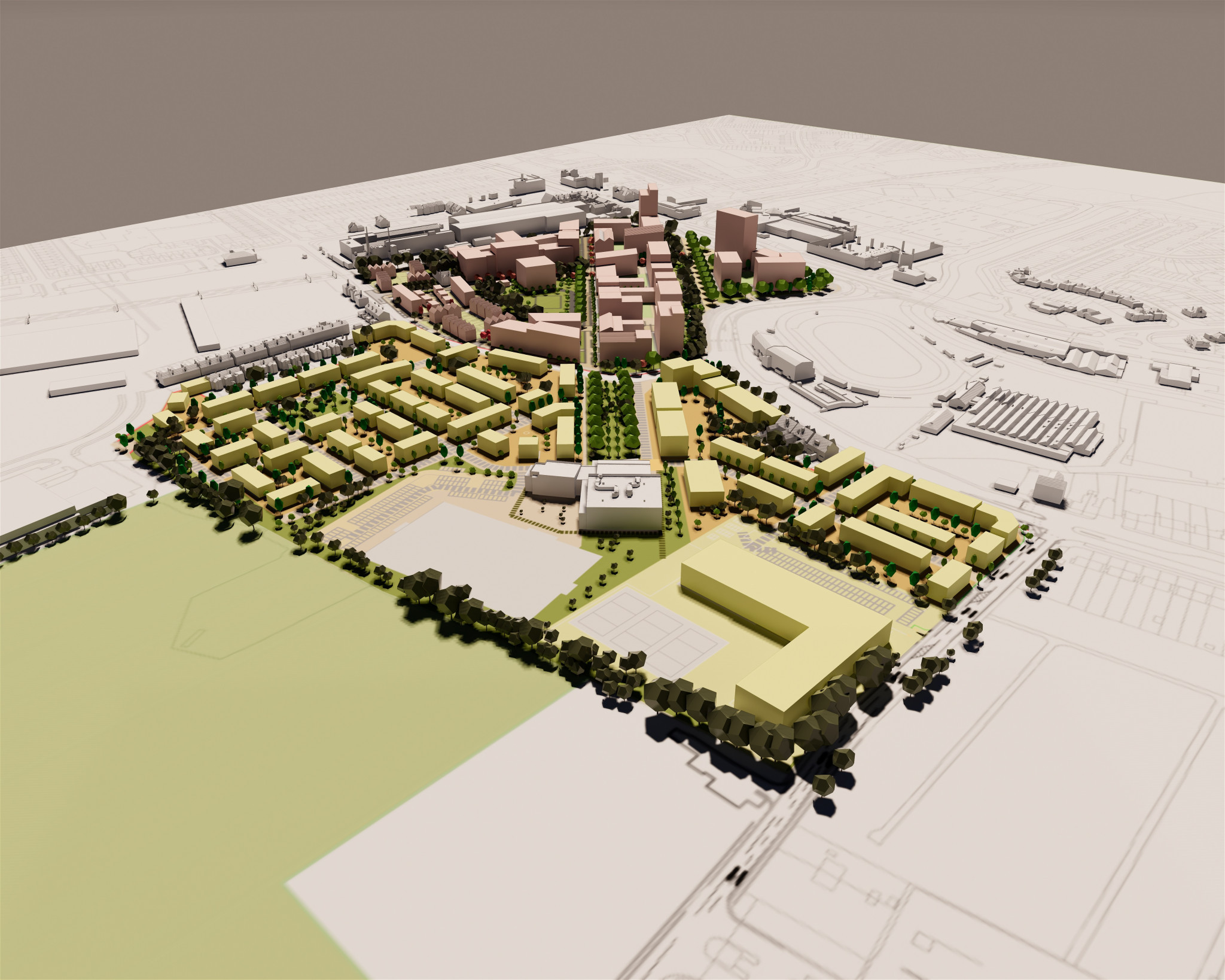 Outline proposals for the second phase of the regeneration of Perry Barr, the location of the Athletes' Village for the Birmingham 2022 Commonwealth Games, have been approved.

The 12.84 hectare site would accommodate 400 to 500 new homes, associated public open space and a new secondary school for 1,260 pupils.

The area, between Holford Drive and Aldridge Road in Perry Barr, is adjacent to the site of the former Birmingham City University Campus - already being redeveloped as the residential element of Birmingham 2022 Commonwealth Games Village, which will then be converted into 1,400 new homes for the public post-Games.

The phase two site approved by Birmingham City Council’s Planning Committee will only come forward for development after the Games, as it will initially form part of the Athletes' Village, accommodating a number of event-time facilities such as the athletes' dining hall and other temporary services.

When developed as around 500 homes, it is intended approximately 90 per cent of the properties across the site will be two, three, four or five-bed houses.

Finer and exact details are due to be brought forward in the coming years as detailed applications are prepared for consideration.

In addition, the existing Doug Ellis Sports Centre and associated all-weather pitch, currently at the heart of the phase two site, will be retained.

"This is the next vital stage in a regeneration project that will transform Perry Barr, as we deliver the housing, infrastructure and jobs that will support our young and growing population," Birmingham City Council Leader Ian Ward said.

"As a thriving city, this second phase of the wider regeneration of Perry Barr will help achieve our aim of enhancing the area, providing a better neighbourhood for all living locally.

"This scheme will undoubtedly build on the solid progress we have achieved on phase one and further cement the legacy that the City Council secures from its decision to back the bid to bring the Commonwealth Games to Birmingham."

The area will also benefit from a number of transport improvements and improvements to Perry Barr railway station.

Separately, proposals for a revamped Alexander Stadium are also going through the planning process.

In total, in excess of £500 million ($608 million/€543 million) of new investment is proposed for the local area, long-identified as an area in need of regeneration through various planning strategy documents.

Ultimately, some 5,000 new homes are set to be constructed in this area of north-west Birmingham, helping meet the city’s need for 51,000 extra homes in the period between 2017 and 2031, as detailed in the Birmingham Development Plan.

The Department for Education-funded secondary school and sixth form, Prince Albert High School, is forecast to open in 2021 as part of the Prince Albert Community Trust family of schools, subject to the reserved matters planning application for the scheme being approved in due course.

"With Perry Barr enjoying the prospect of a significant renaissance from hosting the 2022 Commonwealth Games, there is an opportunity to deliver more housing and create a high-quality sustainable place for existing and new residents," Waheed Nazir, director of inclusive growth at Birmingham City Council, said.

"The success of securing an outline planning application further demonstrates our vision for transforming north-west Birmingham and the ability of the public sector to drive forward major regeneration projects at pace."

Andy Street, the Mayor of the West Midlands, added: "I am delighted to see the plans progressing and we are proud of the part the West Midlands Combined Authority has played, not only in securing funding to develop the land initially for the Commonwealth Games, but also to regenerate this area for generations to come."

As reported by Birmingham Live, the plans for new homes and a secondary school in Perry Barr have prompted anger over the loss of playing fields - and the Council's refusal to pay £418,000 ($508,000/€453,000) to compensate for them.

"Why do we need to sacrifice the playing fields for this to be delivered, the site is quite considerable," Councillor Gareth Moore said.

"I don't see why we can't build a school on the site and keep the playing fields.

"I don't see the logic behind that unless you want to cram a lot more housing in."

In response to this, a Birmingham City Council spokesperson said: "Past planning applications relating to the same site had accepted the redevelopment of the fields - and provided compensation in the form of full community access to the nearby Doug Ellis Sports Centre (up from 30 hours previously secured), which is being retained after the Commonwealth Games.

"More broadly the staging of the Games is attracting significant investment from the Council, its local partners and Central Government, approaching £1 billion ($1.2 billion/€1.1 billion).

"Without the Games, this investment would be coming into the area at a much slower pace, if at all.

"The development of this site is essential to facilitate the event and the long-term legacy it secures for the neighbourhood, the city and the region as a whole.

"The Planning Committee report clearly outlines that these numerous benefits outweigh what is being lost to enable the scheme.

"It must also be noted that following an extensive period of consultation related to this application that just two letters of objection were received."