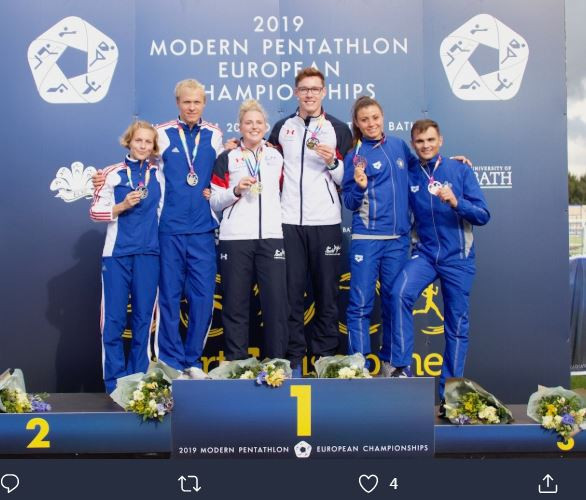 British duo Kerenza Bryson and Myles Pillage won the first title of the week at the European Modern Pentathlon Championships as they claimed gold in the mixed relay competition in Bath in England.

Bryson and Pillage set the fastest time in the swimming pool to earn a lead they never relinquished as they surged to victory at the end of the run-shoot element at the University of Bath.

Their time of 1min 56.46sec for their 200m freestyle was the quickest by the ten nations competing and they built on that lead in the fencing section with 23 wins.

Belarusian pair Ivan Khamtsou and Volha Silkina secured 21 wins to finish as runners-up and stay in contention for a podium finish.

Pillage and Bryson extended their lead in the riding event, conceded just seven penalties as their rivals struggled.

Sikina was thrown from her horse as the second-placed Belarusians faltered and Lithuania were eliminated after four refusals for Dovidas Vaivada.

The only clear rounds went to Alicia Lichancova and Filip Lichanec from Slovakia but they picked up 22 time penalties as Russia and Italy moved into medal contention.

Pillage and Bryson entered the final stage, the run-shoot, with a 40-second advantage and they were never in danger of being caught as they finished clear of their rivals for gold.

Their winning points haul was 1,438 points.

The Championships continue tomorrow with the men's and women's relay events.