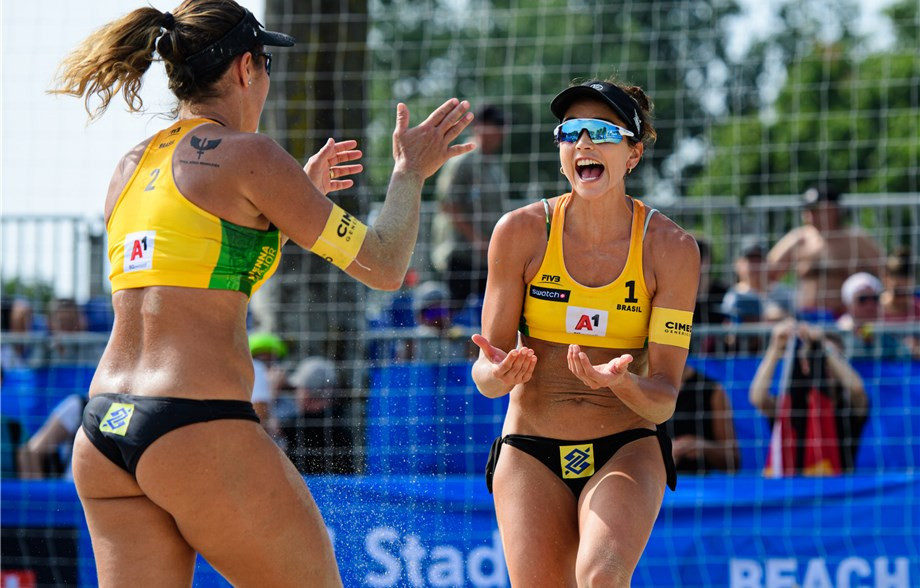 Brazil’s Carolina Salgado and Maria Antonelli topped a highly-competitive Pool F after winning both their matches on the opening day of the women’s main draw at the five-star International Volleyball Federation (FIVB) Beach World Tour event in Vienna.

They then went onto claim a nail-biting 26-24, 24-22 victory over Canada's Heather Bansley and Brandie Wilkerson, who spent 35 weeks as the number one-ranked team in the world earlier this year,

That all came after two qualification wins yesterday, before which they barely arrived on the Austrian capital's Danube Island in time for their first match due to transport issues

"I think with the Brazilians, we are really prepared for these things because we are always playing country quota," Salgado said.

"We have a strong mind on these things.

"I try not to let my mind go to these kinds of problems.

"Sometimes it’s difficult, but we can handle these adversities."

Antonelli added: "It was a difficult day, the teams we played are very good.

"I’m very happy with our team, how Carolina played this game and let’s do it again after tomorrow."

Bansley and Wilkerson's 22-20, 21-15 win over defending champions Barbora Hermannová and Marketa Slukova of Czech Republic was enough to secure a second-place finish ahead of their opponents.

Both pairings are due to play in the first knockout round tomorrow, while Salgado and Antonelli will have a day off.

The men's main draw is due to begin tomorrow.

The event in Vienna is part of the Beach Volleyball Major Series.