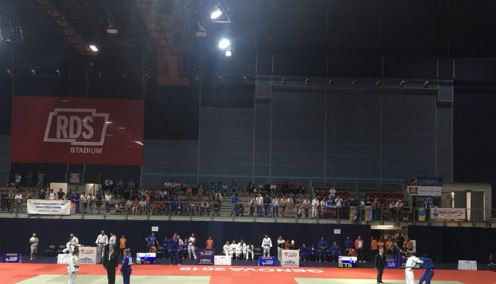 In display of support for the new event, five judoka from four nations joined forces at the start of the day to take on seven other countries.

After despatching Italy and Georgia for a place in the finals, the IBSA team faced Azerbaijan for gold.

Germany’s Tim Meiss and Daniel Rafael Goral, France’s Prescilla Leze, Greece’s Emmanouela Masourou and Romanian European champion Alex Bologa had high hopes going into the final but an upset was not to be.

The IBSA team was missing one judoka, handing Azerbaijan a 1-0 lead before the final had got under way.

Meiss then lost to Rahimli in the men’s up to 81 kilograms whilst Leze fell to Karimova in the women’s over 63kg.

That left Goral to take on multiple European champion Zakiyev in the men’s over 81kg.

Goral put up a spirited display but was at a disadvantage, normally competing in the men’s up to 90kg, compared to Zakiyev from the men’s over 100kg.

After Zakiyev eventually threw his opponent for ippon, he held the German’s arm aloft in recognition of a good match.

The win secured the title for Azerbaijan with two fights to spare.

Azerbaijan team captain Zakiyev said: “I am so happy – another gold medal, we are the champions.

“In May, we hosted the IBSA Judo Grand Prix in Baku and I had a trauma [injury] and after this for a long time I didn’t have any camp or any training so I am very happy.”

Ukraine entered a strong team containing three new European champions in a bid to claim an historic second gold in the event.

They had reached the top of the podium at the International Qualifier in Fort Wayne, United States as the mixed team event made its IBSA debut.

However, at the end of the first three fights in their bronze medal match, Russia had established a 3-0 lead.

But Ukraine had their best athletes yet to come and all of their remaining judoka – European champions Oleksandr Nazarenko, Inna Cherniak and Davyd Khorava – won their respective fights.

A draw was then made to determine who would fight again for the win through golden score.

The women’s under-63kg was picked and Ukraine’s Liudmyla Lohatska lost out after being held on the tatami.

A draw at the end of the other bronze medal match featuring Turkey and Georgia also meant the winner would be decided by golden score.

A second clash between Turkey’s Hidayet Sevinc and Bachuki Shelia was drawn in the men’s up to 81kg.

Shelia emerged the victor, overturning the result from his original bout with Sevinc.