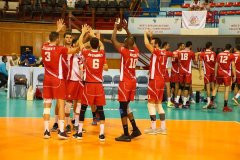 Egypt finished their qualifying matches with three wins from four after today’s 25-21, 27-25, 25-22 triumph over Congo Republic.

Victory in their final Pool A match tomorrow against Botswana, who have yet to gain a point, would see Algeria progress along with the hosts.

Similarly in Pool B, victory over bottom team Burundi would see Congo Republic progress, assuming Cameroon can continue their winning run against Morocco.