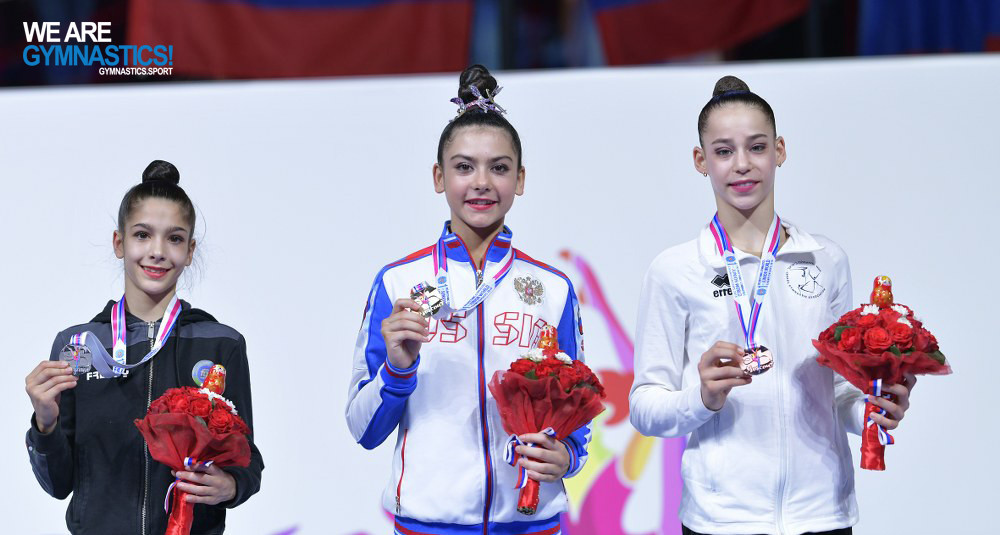 Russia’s next generation of stars secured a clean sweep of gold medals at the first Rhythmic Gymnastics Junior World Championships in Moscow today.

After three days of competition in the new Irina Viner-Usmanova Gymnastics Palace, all eight gold medals on offer had gone to the host nation in the International Gymnastics Federation event.

On the final day of action, all four individual apparatus events and the five hoops and five ribbons went Russia’s way.

“We could do it in our sleep and before we sleep we always think about it and think about any mistakes we have made.”

Earlier, 14-year-old compatriot Anastasia Simakova had ensured the day started as it would end.

Going off first in the rope final – no easy task with a full house expecting one thing – Simakova delivered in style with a score of 20.600 which no one could match.

Russia’s Lala Kramarenko, 14, came into the competition as the big name to watch and far from struggling under such pressure, Kramarenko seemed to revel in it.

“I like the noise of the crowd,” Kramarenko said after comfortably adding the individual ball and clubs titles to the team gold she had helped to win on Saturday.

“My dad has come, it is the first time he has seen me perform live."

Once the Kramarenko show had finished, all eyes turned to Dariia Sergaeva and the final individual event of the day, the ribbon.

With six gold medals already in the bag and just the five ribbons to come – an event Russia had dominated in qualification – Sergaeva was under significant pressure to keep the golden run alive.

Performing to the Ghostbusters theme tune, she managed it, but only just.

“I was very worried after because a loss would have been very serious,” Sergaeva admitted, after several small mistakes left her with a score of 17.650, which would have been enough only for third in qualification.

Given she was out third and her major rivals were still to perform, the teenager faced an agonising wait.

But one after another the likes of Adi Asya Katz of Israel, Valeria Vatova of Bulgaria and Italy’s Sofia Raffaeli failed to take advantage of the Russian’s dip in form.

“I had to win and I did,” Sergaeva said.