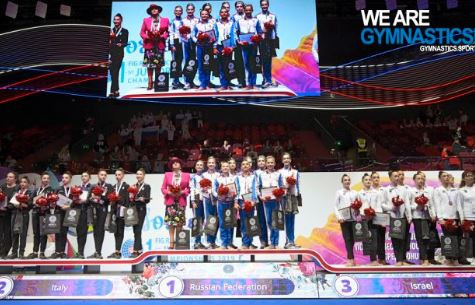 The home nation, led by prodigy Lala Kramarenko, held off Italy, Belarus and Israel at Irina Viner-Usmanova Gymnastics Palace for the second day running, with Russian gymnasts finishing as top performers in all four individual apparatus and the group topping both categories.

Double silver medal winners Italy finished 12.050 points behind in the team event and 4.450 points adrift in the group all-around.

“It’s difficult to say in words what it feels like,” Russian group member Anna Batasova said.

“We didn’t feel any pressure at all.

“It’s easier to be a group, you feel so supported.

“We just went out and had fun.”

The quintet, who were the last group out, followed up their table-topping efforts in the five hoops yesterday with another fine performance in the five ribbons.

"I made some mistakes today, I need to forget about today now and think about tomorrow only.”
Russian 🇷🇺 super🌟 Lala Kramarenko goes into Sunday's #rgjunior2019 individual finals ranked top in Clubs & Ball but still thinks there is more to come⁉️ #Rhythmic #Gymnastics pic.twitter.com/sqJYNMCzfq

“Tomorrow we will try to give our best performance again,” Batasova added.

Having started the day in the all-around contest 0.100 points behind second-placed Belarus, Italy pushed on with good effect.

“I am very proud of all of them,” Italian coach Julieta Cantaluppi said after watching her charges score 20.100 in hoops.

Fifteen-year-old Sofia Raffaeli finished second in both the individual clubs and ribbon qualifiers today, to go with her second place in ball and seventh place in rope from day one.

The Junior World Championships conclude tomorrow, when in the space of an afternoon the medals for all four individual apparatus and two group apparatus will be decided.