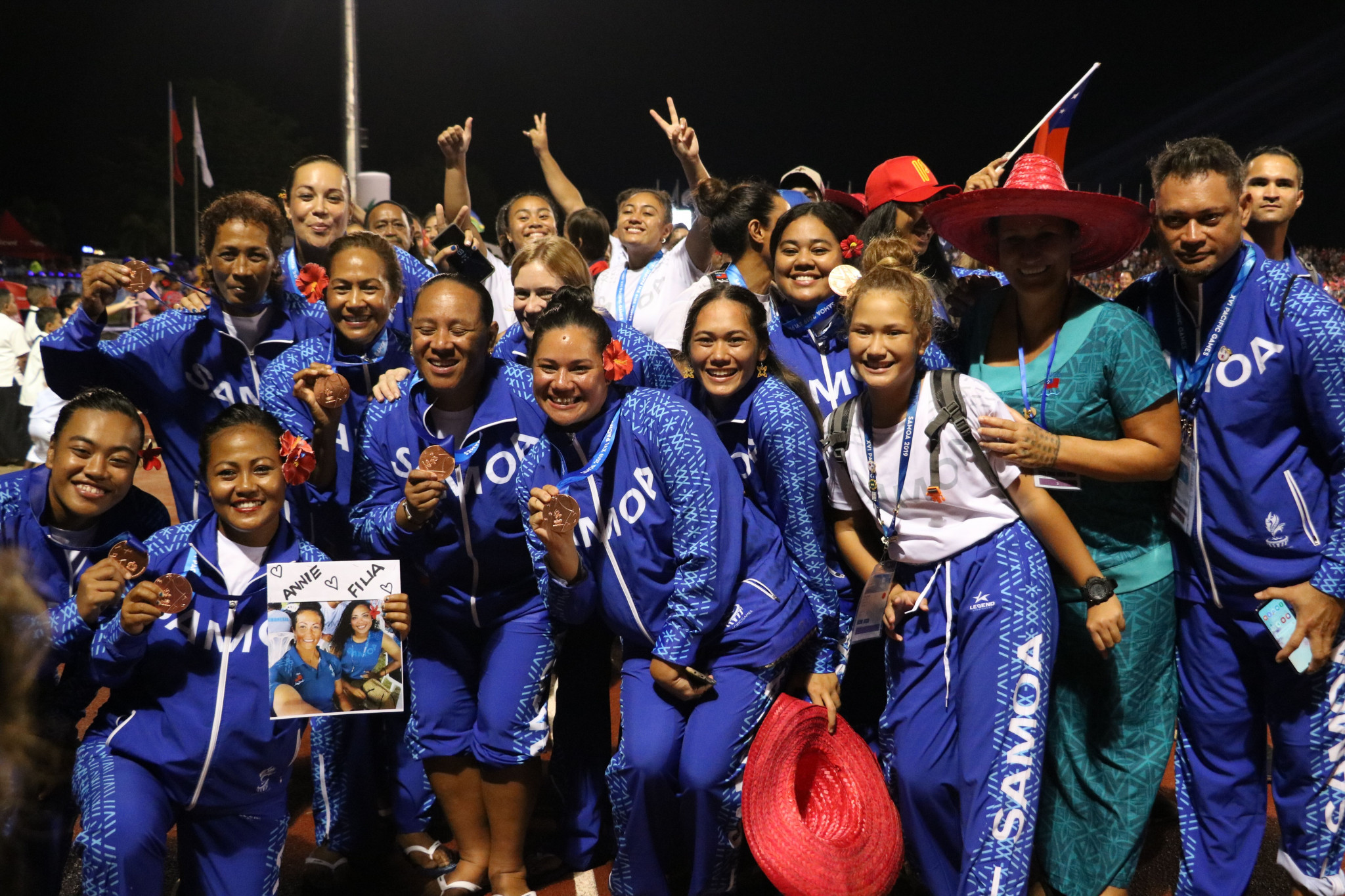 The Ceremony featured plenty of pageantry including thousands of students and schoolchildren performing, as well as a lap of appreciation for the athletes, officials and volunteers who had taken part.

Speeches were made by Malielegaoi and Pacific Games Council President Vidhya Lakhan, which both addressed the issue of transgender athletes.

Debate has rumbled on during the second week of the Games after Laurel Hubbard, who was born male but transitioned in her thirties, won two gold medals in women's weightlifting, with Samoan athletes finishing second and third.

Hubbard has been described as having an "unfair" advantage, although she was cleared under International Olympic Committee guidelines to compete.

Malielegaoi, who commented on Hubbard's eligibility earlier this week, elected to bring up the issue of transgender athletes during his speech.

He said: "Samoa has learned a lot from these Games.

"National sports organisations should hold consultations on transgender sports policies so we can understand the balance of human rights and gender implications."

Lakhan said the Council would look at rules surrounding transgender athletes as part of a wider review post-Games.

He said: "I have been following the local media with great interest.

"Every four years after the conclusion of each Games there is a conclusive review of our sports charter.

"In our next review, as soon as we receive our 2019 Games report, there will be a review on all issues including transgender athletes.

"All governing bodies whose sports are part of the Pacific Games will be consulted."

Malielegaoi also congratulated those who had competed at the Games and said they had proved the Pacific region was blessed with sporting talent.

He said: "The two weeks draw to a conclusion today and what performances we have seen in the past fortnight.

"Not only the Games have become a great continental sporting event, it has taken on deeper cultural importance.

"Samoa has been privileged to have been the field of triumph over the past two weeks.

"Sport events are meant to showcase the collective talent, rather than the winners, for winners only exist because someone stood to compete and dared to lose.

"So to medal winners and those who did not win, I say congratulations.

"The region is blessed with a lot of talent, as is evident by the number of athletes here.

"We are blessed with young men and women with great talent.

"We need to nurture this talent for our future."

The Pacific Games flag was lowered at Apia Park and the Flame extinguished, with responsibility passed on to the Solomon Islands, which will host the event for the first time in 2023.

A video message was played from Solomon Islands Prime Minister Manasseh Sogavare, who congratulated Samoa 2019 on their hosting, before turning attention to the next edition.

"We have been observing Samoa's efforts and we will hope to follow your lead," he said.

"We hope our venues will rank among the best in the region.

"The 2023 Pacific Games will see our islands rise to the challenge as we seek to 'Challenge, Celebrate and Unite'.

"On behalf of the people of the Solomon Islands, we invite you to join us in 2023."