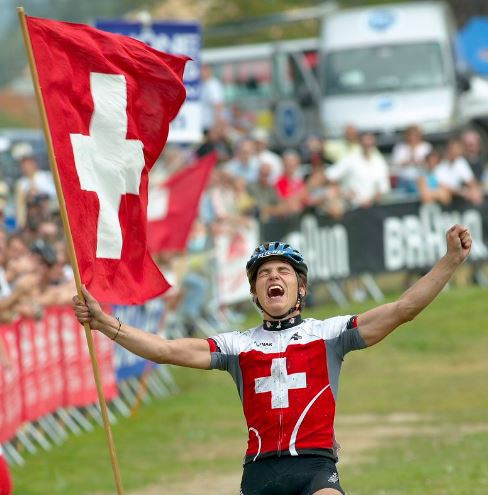 In the seventh of this year’s World Cups, the 33-year-old Rio 2016 gold medallist was tracked on the eighth and last lap by Gerhard Kerschbaumer, and made his decisive move just before the final climb, with the Italian looking momentarily back over his shoulder.

The Swiss rider pushed on to finish in 1 hour 22min 10sec, with Kerschbaumer four seconds behind.

The bronze medal went to Brazil’s Henrique Avancini, 38 seconds back, with home rider Stephane Tempier a further 10 seconds back in fourth in what was the concluding race of the event.

World champion Kate Courtney from the United States had earlier earned an overwhelming victory in the elite women’s race, setting the pace early on before finishing more than half-a-minute clear to add another gold to the one she won in the short track event on Friday (July 12).

Here’s how the #MBWorldCup overall looks like after today’s racing.
🌈🔛🔝
The World Champions are still on top! pic.twitter.com/LftkaoR7XB

Jolanda Neff of Switzerland could make only a minimal impact on the final lap, taking the silver medal at 33 seconds, and bronze went, at 65 seconds, to Germany’s Elisabeth Brandau, who thus added to her short track bronze.

France’s Pauline Ferrand-Prevot, a silver medallist on Friday, claimed she was "super motivated" for a race on home soil on Bastille Day, but a minor accident on the last lap finished her podium hopes, and she took fifth place, 92 seconds, behind.

Earlier, Romania’s Blad Dascalu had won the men’s under-23 title in 1:13.22 ahead of Germany’s Max Brandl, 22 seconds back, and Sean Fincham of Canada, who was at 46 seconds.