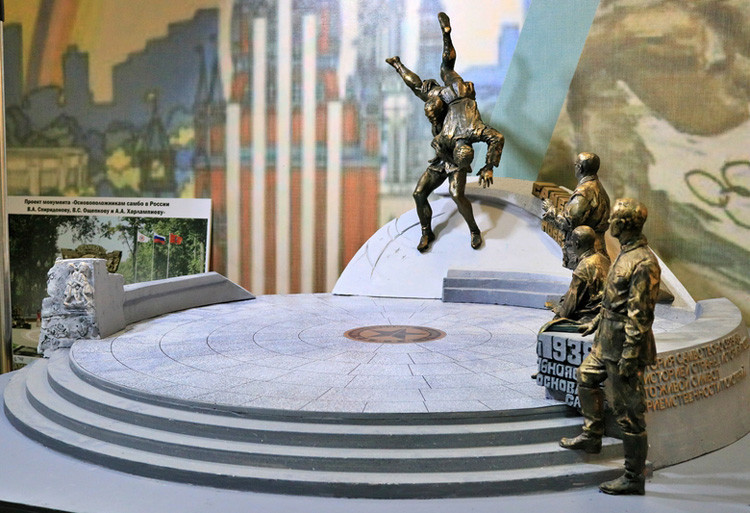 The design of a monument dedicated to the founders of sambo in Russia has been unveiled following the conclusion of a competition.

The monument will be installed at the Luzhniki Sports Complex in Moscow.

Four projects were presented in the final stage of the competition.

The work of Salavat Shcherbakov, entitled "Sambo - the Science to Win", was chosen after 11 out of 15 jury members voted for it.

As claimed by the sculptor, the monument will become a popular meeting place for people of the "sambo brotherhood", as well as a recreational setting for the wider public.

One side of the composition is devoted to the founding of sambo in the Soviet Union in 1938.

It includes sculptural portraits of the founders of the martial art - Victor Spiridonov, Vasily Oshchepkov and Anatoly Kharlampiev.

The other side of the composition is decorated with a relief sculpture, depicting warriors in attack, and a portrait of the Honoured Master of Sports and Honored Coach of the Soviet Union, Yevgeny Chumakov.

In the centre, there is a sculptural composition of athletes fighting.

The decision to install the monument was made at a meeting of the Commission on Monumental Art at the Moscow City Duma at the end of last year.

A proposal to that effect was addressed by the All-Russian Sambo Federation.

An International Sambo Center is also due to be erected at the Luzhniki Sports Complex.

"The competition and the further installation of monuments is a very important event for our sport," Sergey Eliseev, vice-president of the International Sambo Federation, said.

"We were able to plunge into the cultural aspect, which allows us to develop sambo not only on the mat, but also outside it."