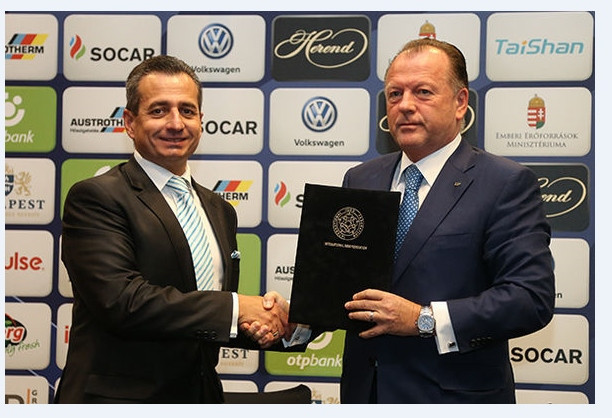 Budapest is set to host the 2022 International Judo Federation (IJF) World Championships, it has been revealed.

IJF President Marius Vizer made the announcement during the Grand Prix which started today in the Hungarian capital.

The city had hosted the Championships in 2017 at the László Papp Budapest Sports Arena when Japan finished top of the overall medals table with a total of 13, including eight gold - more than all the other countries combined - and France's heavyweight Teddy Riner claimed his 10th world title.

"It's a great pleasure to welcome you here to one of the judo capitals of the world," Vizer, whose Presidential office is based in Budapest, said.

"Hungary is the country that organised the 2017 World Championships, many Grand Prix in the past, the Hungary Cup and I can announce provisionally that Budapest will host the 2022 World Judo Championships."

Budapest also hosted the IJF World Championships for Juniors in 2004 and Cadets in 2009.

It is the latest major event to be awarded to Budapest, whose campaign for the 2024 Olympic and Paralympics collapsed because of local opposition but who still hope to bid for the Games, probably the 2036 edition.

Last year they staged the United World Wrestling Championships and in May hosted the International Table Tennis Federation World Championships.

Budapest is due to play host to the International Fencing Federation World Championships from Monday (July 15).

Later this year the city on the banks of the River Danube is due to stage to the first World Urban Games, a new multi-sport event launched by the Global Association of International Sports Federations.

Budapest is also set to host matches at the new Puskás Aréna during next year's UEFA Euro 2020 which, for the first time, is being held across several countries.

Last month the International Tennis Federation announced that Budapest would stage the revamped Fed Cup Finals from 2020 until 2023.

In April it was announced that the start of the Giro d'Italia - one of cycling's three Classics - would be held in Budapest.

Budapest has also launched a bid for the 2025 Summer Universiade.