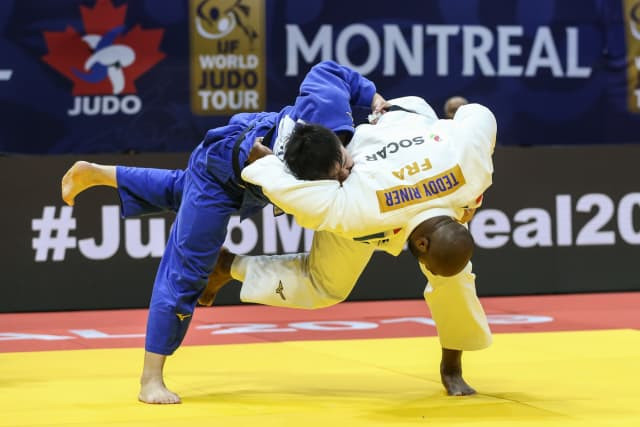 Double Olympic champion Teddy Riner showed that he is still the man to beat despite a 20-month absence as he won heavyweight gold at the International Judo Federation (IJF) Grand Prix in Montreal.

The Frenchman, a 10-time world champion who has incredibly not been beaten since 2010, made his highly anticipated return to the tatami in the Canadian city after not seeing action since November 2017.

Thirty-year-old Riner has now set his sights on a third consecutive Olympic title in the men's over-100 kilograms class at Tokyo 2020.

He defeated Japan's Hisayoshi Harasawa in today's final at the Maurice Richard Arena, a repeat of the Rio 2016 Olympic gold medal bout which also went the way of Riner.

The contest went to golden score after the two judoka shared four shido penalties between them, and it was the Frenchman who made the decisive move as he flipped Harsawa for a waza-ari.

He also needed golden score to defeat under-100kg Olympic champion Lukas Krpalek of the Czech Republic in the semi-finals, who has moved up the weight divisions.

Riner eventually threw his rival but only after three nervy minutes of the extra period.

His winning streak now stands at a remarkable 148 matches.

"It was no easy comeback, it was a long period," said Riner as the Grand Prix concluded today.

"Today I won but I competed against some fine opponents.

In today's other weight divisions Japan confirmed their dominance of the sport with three more gold medals to end the event with seven.

Hosts Canada were disappointed in the final of the men's under-100kg as Shady Elnahas was beaten by Egypt's top seed Ramadan Darwish who connected for ippon.

Canada also won a bronze through Kyle Rees as he shared the third step of the podium with Brazil's Leonardo Goncalves.

The next competition on the IJF World Tour is the Budapest Grand Prix which begins on Friday (July 12).