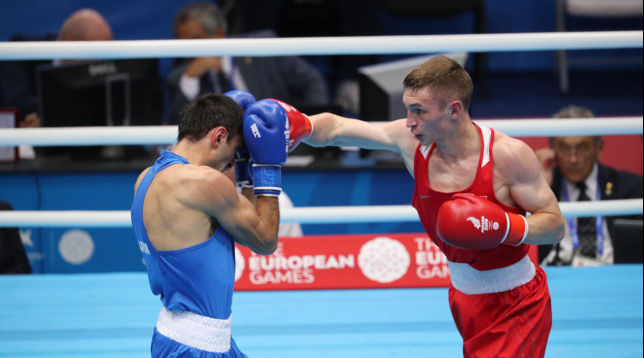 Belarusian favourite Dzmitry Asanau earned gold in the men's 60 kilograms lightweight as the first of the 2019 European Games boxing medals were awarded here.

Asanau took on Russian Gabil Mamedov in the final at Sports Palace Uruchie, triumphing with a 4-1 split decision.

The victory saw the Belarusian upgrade on the silver medal he had obtained at the 2015 European Games in Baku.

"I have always dreamed of hearing the Belarusian anthem at a major competition," Asanau said.

"I liked to image myself standing on a pedestal and singing the anthem of the Republic of Belarus, and today is the day when on the home ring, with such a support, I managed to fulfill my little dream."

Here's the best of the action as @PatMcCormack14 secures our first boxing gold of the 2019 European Games!#Minsk2019 pic.twitter.com/17hT5gD2FH

McCormack's compatriot Benjamin Whittaker did not have as much joy, losing the men's 81kg light heavyweight to Loren Alfonso Dominguez.

The Azerbaijani was considered to have just edged the bout, winning 3-2.

Winners in the men's competition were awarded the European title as well as a gold medal, with the event doubling up as the men's European Championships.

Karolina Koszewska of Poland topped the podium in the women's 69kg welterweight with victory over Assunta Canfora of Italy, claiming a 4-1 spit decision.

Boxing medals are due to continue to be awarded tomorrow.

Germany had a triumphant day at the Tennis Olympic Centre, earning gold in both the men and women's team table tennis event.

They also subsequently booked their places at next year's Olympic Games in Tokyo.

For the women's team, their title defence was successfully completed when they eased past Romania 3-0 in the final, with Poland battling against Hungary to win 3-2 and receive bronze.

Germany were equally dominant in the men's competition, beating Poland by the same score line.

Defending champions Portugal had to make do with third place after overcoming Denmark 3-1 in the bronze-medal match.

Beach soccer came to a conclusion at the Olympic Sports Complex, with Portugal emerging victorious after an impressive comeback against Spain.

The eventual winners had been 2-0 down by the end of the first period, before taking the lead in the second period to go 4-2 up.

From there they were comfortable, he match finishing at 8-3.

The bronze medal went to Switzerland after a close encounter with Ukraine, which they narrowly won 5-4.

Competition here is set to conclude tomorrow, with the final medals being awarded in six sports.

The end of the second edition of the European Games will then be marked by a Closing Ceremony at Dinamo Stadium.