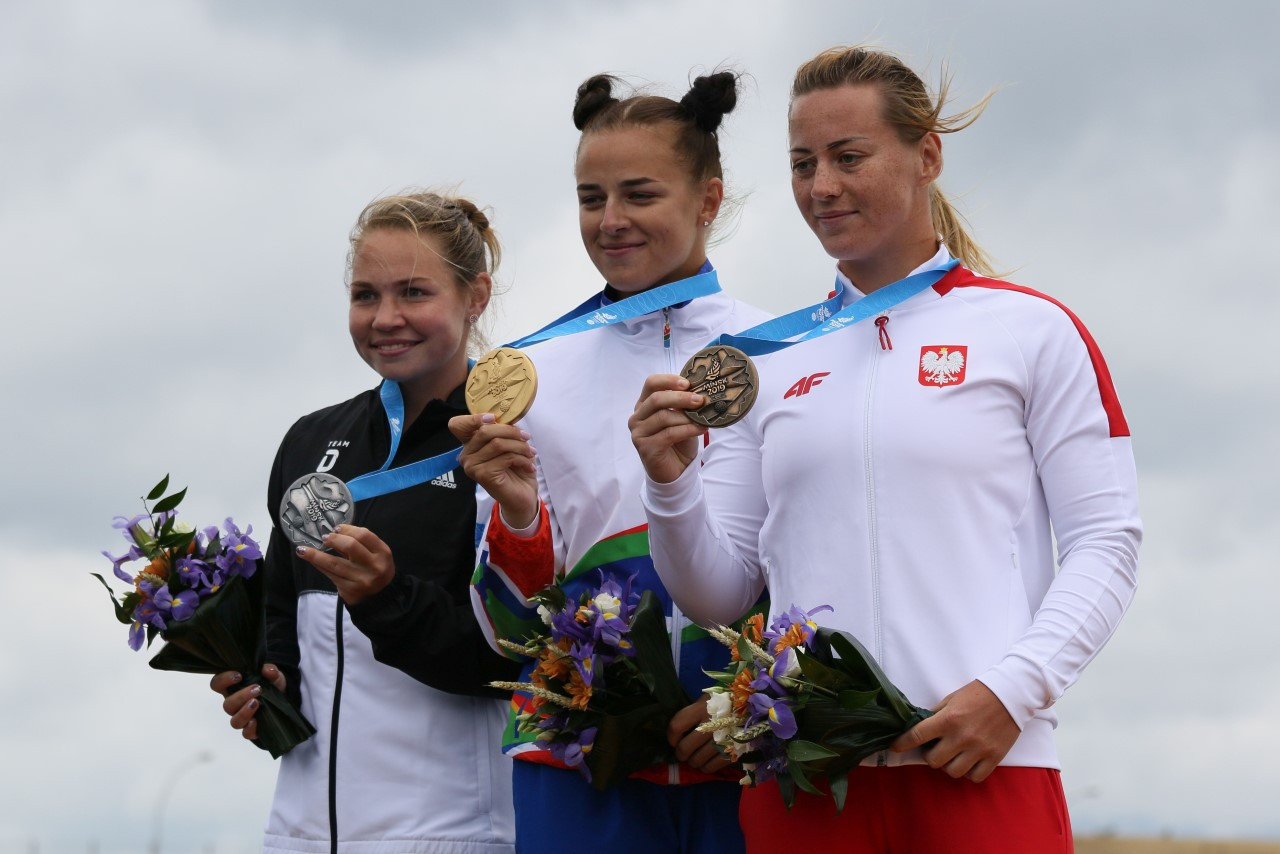 Hosts Belarus built solidly on their position behind leaders Russia in the overall medals table at the 2nd European Games with a huge run of success on the rainswept, windswept second and final day of the canoe sprint competition, where - under the approving gaze of their President - they added four more golds.

Maryna Litvinchuk, who had won gold with Volha Khudzenak in the previous day’s K2 500m event, earned Belarus their fourth gold of the day, and their fifth overall, as she won the final women’s event at the Regatta Course Zaslavl – the K1 5,000m.

Nineteen-year-old Alena Nasdrova had increased to three the total of canoe sprint gold medals for an inspired home team on the day as she won the women’s C1 200m in difficult conditions.

"The rain came, it covered up my glasses, but I could already see the buoys at the finish," Nazdrova told the Games news service.

"I didn't mind the rain. I even told myself that it will make this race more heroic.

"I knew that all the girls will be fighting to the end, that each girl will give it her all, that each one will claw at this distance with her nails.

"The rain just gave us an even bigger sense of heroism. All the girls felt it."

Kozyr clocked 42.835sec to finish ahead of Italy’s Nicolae Craciun, who recorded 43.353 for silver.

Bronze went to Spain’s Alfonso Bnavides, who timed in at 44.255.

The opening gold of the day was contributed by Khudzenska in the women’s K1 500 metres as she crossed the line in 2:03.929sec to beat Hungary’s multiple world and Olympic champion Danuta Kozak, who clocked 2:04.176.

Mariya Povkh and Liudmila Kuklinovska clocked 44.781 to win, with Germany’s Franziska John and Tina Dietze finishing in 44.961 for silver.

After two surprise canoe sprint defeats at the hands of the hosts, Hungary reasserted itself in the women’s C2 500m event as Virag Balla and Kincso Takacs claimed gold with a time of 2:11.129sec.

Hungary finished canoe sprint medal morning back on top with victory in the women’s K4 500m event as they held off hosts Belarus – who had the individual gold medallist from earlier in the morning, Volha Khudzenka, on board – by little more than a 10th of a second.

Jørgensen became a gold medallist in the afternoon’s racing over 200 metres.

On a day that began with wind and then moved to wind and rain, the Danish paddler won the women’s K1 200m title in 41.625sec.

Bronze went to home paddler Dzmitry Tratsiakou, who finished in 39.351.

Balint Kopasz restored some of Hungary’s battered pride in the competition as he won gold in the concluding event – the men’s K1 5000m – in 21:45.255sec.

Silver went to Portugal’s Fernando Pimenta, who recorded 21:46.554, with Germany’s multiple world and Olympic champion Max Hess adding another medal to his collection here, this time bronze, in 21:49.276.

Beating the world number one men’s compound archer Mike Schloesser to gold proved a challenge too far for Luxembourg’s Gilles Seywert – but only just.

The surprise finalist, world-ranked 42nd, had admitted before the final that his ambitions at the European Games had extended no further than getting past the first round.

But in testing weather conditions at the Olympic Sports Complex, he advanced all the way to the gold medal match, eventually settling for silver as he was narrowly defeated 145-144 by the 2013 world champion and first archer to score a perfect 600 in World Archery competition.

Experience triumphed over youth in the men’s recurve individual final, with gold going to Italy’s Mauro Nespoli and silver to Steve Wijler of the Netherlands after a 6-4 scoreline.

Given that 31-year-old Nespoli, who won team silver and gold respectively at the Beijing 2008 and London 2012 Olympics, is world ranked four, one place below his 22-year-old opponent, this was always likely to be a tight final and so it proved.

Pablo Gonzalez of Spain won the bronze medal match, beating Italy’s David Pasqualucci 7-1, and in so doing earned his nation a qualifying place for the men’s recurve individual competition at the Tokyo 2020 Games.

The Italian and Dutch quota places were already secured before the European Games got under way.

Archery is one of eight sports here to offer pathways of varying directness to Tokyo 2020 qualification, through the recurve events that are part of the Olympic programme.

Following the mixed competition and women’s recurve individual events, Tokyo 2020 quota places have been secured by the Netherlands, who lost the mixed event to Russia on an 18-17 shootout, and Italy, who provided both women finalists.

At the wrestling venue, the men’s 97kg gold medal proved anti-climactic as Azerbaijan’s Nurmagomed Gadzhiyev was unfit to contest the final, which went automatically to Russia’s world champion Abdulrashid Sadulaev.

There was controversy in the women’s  53kg class, where the final decision went against Ukraine's Yuliia Khavaldzhy, who had has two points deducted which allowed Sweden's Sofia Mattsson to win 6-4.

Bronze in that category went to Germany’s Nina Hemmer and Russia’s Stalvira Orshush.

She scored 459.6 to triumph, edging past Nikola Mazurova of Czech Republic on 453.9.

In third was another Russian, Polina Khorosheva, who scored 444.0.

She was tied at 53 with France's Lucie Anastassiou, scoring four to her opponent's three in the resulting shootout to win.

Sweden's Stefan Nilsson was the victor in the men's shotgun skeet.

He scored 57 to win, edging past Czech Tomas Nydrle's result of 56.