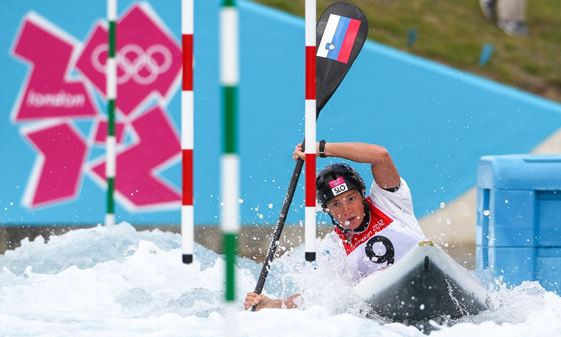 An expected heatwave across Europe this weekend will give competitors in Slovenia an extra challenge as the third International Canoe Federation (ICF) Canoe Slalom World Cup of the season begins in Tacen, Ljubljana.

Temperatures across central Europe are set to soar into the mid-30s as Britain's Joe Clarke renews his rivalry with home paddler Peter Kauzer and Jiří Prskavec from the Czech Republic in the men's K1.

Eva Tercelj of Slovenia is hopeful that conditions on the water will make conditions cooler for athletes when competition gets under way tomorrow.

"I think it’s harder for spectators,” she said.

“We are on the water, so we can cool down.

"We have to stay in the shade and keep ourselves cool.”

Tercelj will be hoping to take advantage of local knowledge on the tricky course but admits it is a challenging channel.

She added: "“The whole course is very technical and I love it because I train here.

"It’s a hard course, but if you train here it is a little bit easier.”

Slovakian trio Michal Martikán, Alexander Slafkovský and Matej Beňuš will have their work cut out on their rivals' territory as they take on Slovenian favourites Benjamin Savšek and Luka Božič in the eagerly-anticipated men’s C1.

Tasmanian Daniel Watkins will race in the men's K1 and C1 and is taking confidence from the speed he showed at the first two World Cup events.

In London, Watkins reached only his second senior K1 final and is gunning for a place at Tokyo 2020 with a solid season on the channels.

"I feel good taking it one World Cup at the time," he said.

"We have a really good group training environment in the K1 men and C1 men and it’s great to be part of both of these groups and work towards the collective goal of securing Australia a spot at Tokyo 2020 come September.

"In the end, only one person is going to go but we are all enjoying the journey so far.”

Reigning K1 and C1 world champion Jessica Fox from Australia went through the 2018 season without losing a race and will hope to continue that form in Slovenia.

Doubling up in both events alongside her sister Noemie Fox and compatriot Rosalyn Lawrence, she will face tough competition.

Austrian rival Corinna Kuhnle brought to an end Fox’s winning run in the women's K1 in Slovenia last year and is sure to pose a threat.

Meanwhile, the Japanese team will use the World Cup as part of their Olympic qualifying programme.