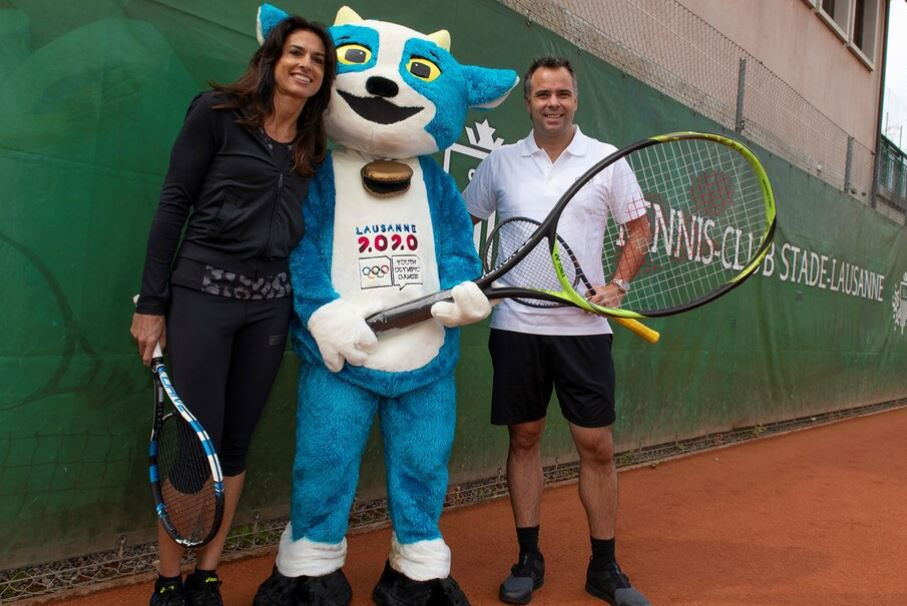 Olympc Day celebrations have been led here by some of the legends of sports.

Athens 2004 men's doubles tennis champion Fernando González of Chile and Olympic silver medallist Gabriela Sabatini of Italy welcomed to the Stade-Lausanne Tennis Club by more than 30 children and the duo enjoyed the opportunity to pass on their advice.

"It’s a great atmosphere," Sabatini, winner of her silver medal at Seoul 1988, said.

"I love being around kids and seeing how much fun they are having.

"We have the possibility to play with them and offer them some advice; it is fantastic for us also.

"The kids were playing really good tennis, and you can tell that some of them are really competitive and ready for competition I think."

"When I was their age and started gymnastics, there were not many sports for women, and gym was one of them," she said.

"I myself was looking up to someone who was succeeding.

"We always have someone to look up to, and we always try to become good in what we do.

"By being here I hope I can give the kids a new motivation and inspire them to be the best at what they do and just realise that what they do is good for them."

Earlier in the day, Mayor of Lausanne Grégoire Junod joined Bach and representatives of the local authorities to officially inaugurate a new playground in front of Olympic House.

The IOC contributed to the reconstruction of the playground after the original play area was dismantled to accommodate the new headquarters' water pipe coming from the lake to cool and heat the venue.

The new playground, designed around the theme of "Birds of the Lake", offers a wide range of fun games, included five wooden birds that feature climbing walls.

The area around Olympic House has also been developed with 103 large oak trees being planted and 90 shrubs, while the nearby "Place de Granit" granite fountain – produced for the Swiss National Exposition in 1964 by Bernard Schorderet – has been fully renovated.

Bach and Junod later presented the Olympic House point of interest, recognisable by the march arch that was a part of the former IOC building.

The site is set to become a tourist attraction and a starting point for a new promenade along Lake Geneva which leads to the Olympic Museum.

More than 2,000 people took part in the Olympic Capital Run celebrating 125 years of the IOC as the Olympic stars concluded their day by greeting finishers at the Pierre De Coubertin Stadium.