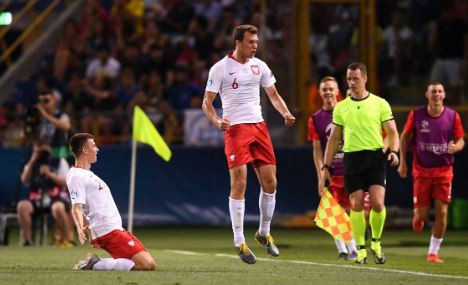 Poland defeated hosts Italy 1-0 in Bologna to put themselves in the driving seat to reach the UEFA European Under-21 Championship semi-finals.

Italy came into the Group A match off the back of a stunning 3-1 fightback win against Spain and had the best of the possession in the opening stages at Stadio Renato Dall'Ara.

It was Poland who took the lead in the 40th minute, though, when Krystian Bielik struck a half-volley home after a free kick had been charged down.

Italy thought they had equalised just before the break but Ricky Orsolino was judged to have strayed offside.

There was to be no repeat of Italy's heroics against Spain as they couldn't make their possession count against a resilient Poland.

A fizzing Federico Chiesa volley was pushed behind by Polish goalkeeper Kamil Grabara, who also got down to stop a Federico Dimarco free-kick as the hosts sought an equaliser at the start of the second half.

The Italians upped the pressure but their play in the final third was not on the mark as crosses were overhit and the service into Moise Kean was lacking.

Playmaker Chiesa ran the show again for the Azzurri but he could not forge a breakthrough.

A 25-yard strike from Lorenzo Pellegrini smacked the woodwork on 75 minutes before Belarussian referee Aleksei Kulbakov waved away furious Italian calls for a penalty when Patrick Cutrone went down after seemingly running into Bielik.

Nicolo Zaniolo replaced Claud Adjapong but Italy could not find a leveller and Poland will only need a point against Spain on Saturday (June 22) to progress to the semi-final - and guarantee the country a place at next year's Olympic Games in Tokyo as the top four in the tournament will qualify.

For Italy, the situation is a bit more complicated as they will now need to rely on qualification as the best runner-up from the three groups.

To do that, they will need to beat Belgium and hope for a Polish victory against Spain, all before the other groups are taken into account.

Pablo Fornals was the Spanish hero as he scored a late winner against Belgium to keep their faint hopes of reaching the semi-finals alive at Mepei Stadium - Città-del-Tricolore in Reggio Emilia.

The Spanish midfielder, who joined English Premier League side West Ham United from La Liga side Villareal last week for £24 million ($30 million/€27 million), struck from 20-yards to seal a crucial three points to keep Spain in the hunt for the semi-finals.

Belgium had a goal chalked out when Dodi Lukebakio was flagged offside after just five minutes and the pendulum swung in Spain's favour moments later.

Dani Olmo drilled a low shot to the bottom right corner after Carlos Soler's cut back with just six minutes on the clock.

The Belgians got back on level terms midway through the first-half when Sebastian Bornauw scrambled the ball into the net from a corner.

Dani Ceballos saw a fierce free-kick strike the crossbar as Spain looked the more likely to take a crucial victory.

Belgian goalkeeper Ortwin de Wolf kept his side in the game with a string of fine saves but Fornals' 89th-minute drive gave Spain hope of a semi-final return, after they finished as runners-up in 2017.