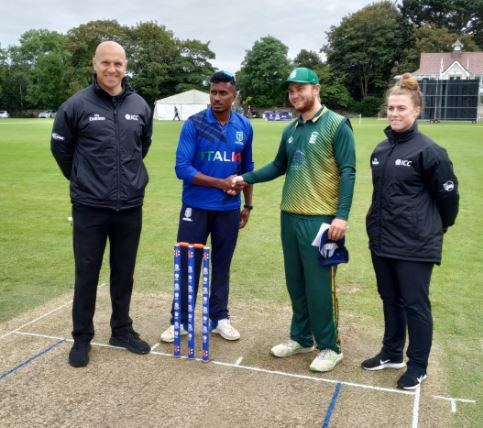 Jonty Jenner and Nick Ferraby set them on their way with 36 and 25, respectively, as they made 131-9 from their 20 overs after Denmark put them in to bat first.

Elliot Miles was the pick of the Jersey bowling attack with 3-10 as Denmark came up short in their reply, finishing 18 runs behind on 113-8.

Jersey followed up with a comprehensive 80-run victory against Norway, with Ben Stevens running the show.

Jenner had put Jersey in command with 35 runs before Stevens contributed 44 more from 41 balls, the Channel Islanders eventually closing their innings on 160-5.

A tough task was made harder when Norway stumbled to 13-2 before Stevens ripped into the middle order with 3-17, including a caught-and-bowled effort for the fifth wicket.

They put Germany in to bat first and Harmanjot Singh finished on 40 not out as Germany stumbled to 134-8, Baljit Singh claiming 3-19.

Against hosts Guernsey, Italy had a tougher task after being put in to bat first.

Guernsey were on course for victory with a fifth-wicket stand of 66 taking the hosts to 92-5.

But they lost momentum and ultimately fell 11 runs short at 110-8 after 20 overs.

Tomorrow, Norway and Denmark will play in a rescheduled group match after rain prevented play on Saturday.

The group winners will advance to the 14-team ICC T20 World Cup qualifier in the United Arab Emirates.

The host nation will compete in the event in October, alongside Scotland, Zimbabwe, the Netherlands, Hong Kong, Oman and Ireland, who qualified due to their ranking at the last World Cup.

One Asian and two Americas places at the qualifier will be determined by the results of regional events in July and August, respectively.