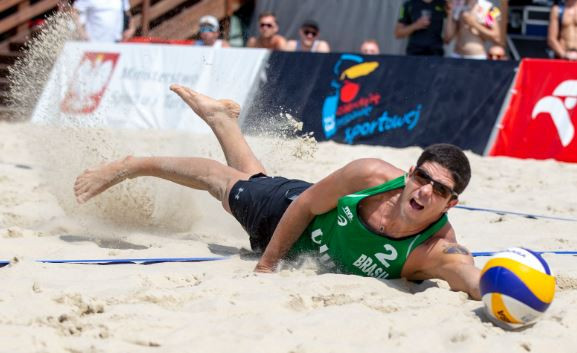 German duo Julius Thole and Clemens Wickler progressed to the last 16 of the men's International Volleyball Federation (FIVB) Beach World Tour in Warsaw after fourth seeds Nicholas Lucena and Philip Dalhausser were forced to withdraw from their Pool D match.

The 13th seeds led their American rivals 21-13, 4-2 when Dalhausser complained of discomfort in his abdominal muscles.

Thole and Wickler will face Russia's Nikita Liamin and Taras Myskiv in round two tomorrow after they fought back to defeat Americans Trevor Crabb and Tri Bourne 20-22, 21-19, 15-10.

The Italians joined their Brazilian rivals in round two with a straight sets 21-16, 21-19 win against Canadians Grant O'Gorman and Ben Saxton.

Norway’s Anders Mol and Christian Sørum hold the number one spot in the world rankings and managed a 24-22, 21-16 victory against Theodore Brunner and William Reid Priddy from the United States in Pool B.

They will face Americans Emily Stockman and Kelley Larsen after the duo breezed to a 21-13, 21-14 victory against compatriots Alexandra Klinemann and April Ross.

They will face Carolina Solberg Salgado and Maria Antonelli tomorrow after the Brazilians edged a tight round-three clash 21-19, 21-19 against Russian duo Nadezda Makroguzova and Svetlana Kholomina.