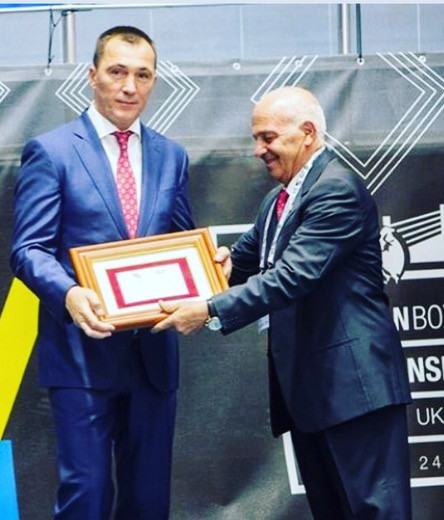 Prodyvus, a member of the AIBA Executive Committee, made the claim in a letter sent to Moustahsane as the two continued their heated exchange amid the fallout to the International Olympic Committee (IOC) decision to suspend the embattled governing body.

In his response to a letter sent by the Moroccan last week and seen by insidethegames, Prodyvus claims the supposed improvement made by AIBA since 2018 "does not grant you enough rights to demand unity within AIBA family around your vision and management of our organisation".

The Ukraine Boxing Federation President also reiterated his disagreement with the way AIBA has managed the crisis after it was suspended as the Olympic governing body for the sport by the IOC and stripped of any involvement in the boxing event at Tokyo 2020.

The AIBA Executive Committee agreed to grant the AIBA Bureau, comprising the five Confederation Presidents, Moustahsane and executive director Tom Virgets, the power to respond to the IOC.

He also reaffirmed his belief that an Extraordinary Executive Committee meeting should be held before the IOC Session on June 24 to 26 – where the suspension will be ratified by the membership – to pave the way for an Extraordinary Congress, where elections would be held.

The AIBA Executive Committee is scheduled to meet on June 27, the day after the conclusion of the Session.

The letter is the latest example of the growing schism within AIBA as some Executive Committee members have grown disillusioned with the lack of action from the leadership since it was suspended by the IOC.

"Dear Interim President, what kind of criteria and standards do you and appropriate AIBA bodies, which you refer to in your letter, use to confirm the situation surrounding AIBA to be under control?" Prodyvus writes.

"Regardless of the arguments we make in our letters, the bottom line is that AIBA has not transformed nearly enough, increased various risks for the Olympic Movement and will be inevitably suspended from it.

"AIBA will fail without immediate, radical cleansing as well as additional substantial reform.

"I stated my disagreement privately and publicly with your position on managing the IOC inquiry and its outcomes.

"AIBA National Federations, Executive Committee Members and I are left hoping that you will indeed succeed in showing genuine desire for further reforms and renovation within our organisation to the IOC Membership prior to the IOC Session.

"I also hope that the AIBA Executive Committee will ultimately find the additional reform package you plan to unveil as one that can ultimately reinstate AIBA’s Olympic status following Tokyo 2020."

Moustahsane, elected Interim President after Gafur Rakhimov - whose election as President was the catalyst for the suspension - stepped aside in March, has not yet responded to the latest letter from the Ukrainian.

In his last reply, the Moroccan, whose role as head of the AIBA Draw Commission for the scandal-tainted boxing tournament at Rio 2016 was cited as a concern by the IOC, accused Prodyvus of spreading "misleading and false information".

Prodyvus had criticised what he claims is the secretive nature of the AIBA leadership, which he alleged had kept the Executive Committee "in the dark" as to how it would ensure the suspension was lifted after Tokyo 2020.