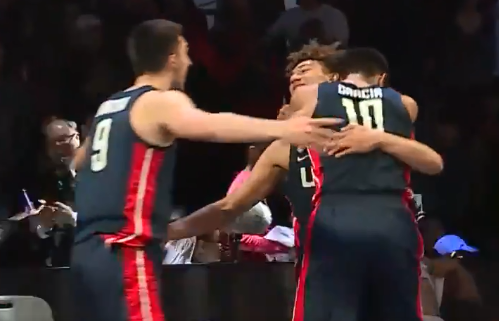 The United States completed a double at the International Basketball Federation (FIBA) 3x3 Under-18 World Cup as their men's and women's teams took home gold medals.

It concluded a magnificent tournament for the US in Mongolia, where they won all 14 of their games across the men's and women's competitions.

The women's event was the first to be wrapped up, as the US took home gold after seeing off New Zealand 19-13.

Having topped Pool B – including beating the New Zealanders into second place – they then steamrollered their way through the knockouts on Friday, beating Indonesia 16-10 in the quarter finals and France 21-11 in the final four.

Hailey Van Lith was named the tournament's most valuable player and adds this title to her FIBA Under-17 World Cup gold medal and gold at the 2018 Youth Olympic Games,

She said: "It's unspeakable, there's no words for winning a gold medal for you country.

"Me and my team worked so hard for this, we just did this for the people back home, we are just so thankful.

"That was hard work, that isn't just given to you. Me and my team mates worked so hard, I just can't thank them enough."

The men's tournament saw the US score the maximum 84 points – 21 from all four games, one for each basket before the game is called to an end before the 10-minute cut-off – as they eased past Mongolia, Latvia, Georgia and Belarus.

After cruising 19-12 past Italy in the last eight, things got much tougher in the semi-finals as they faced a fellow unbeaten side in Russia, but edged through 18-17.

The United States faced Turkey in the final, where they emerged 16-12 victors.

It gives the US a welcome boost ahead of 3x3 basketball's Olympic debut in Tokyo 2020.