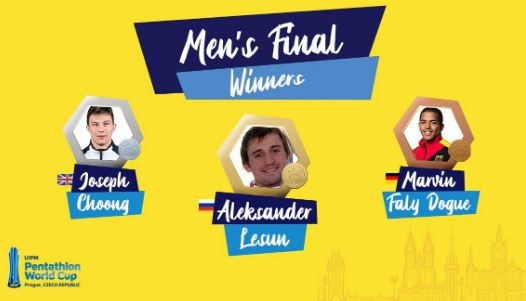 The 30-year-old from Barysaw, who has two individual world titles to his name, looked on course to win after dominating in the fencing and finished with 1,489 points.

“I am satisfied with the venue, the horses and the course – everything.

It has been an amazing day here at the Men's Final of the UIPM 2019 Pentathlon World Cup, Prague. Congratulations to all the pentathletes that have competed so far! 👊🏃‍♀️🤜💪🤺🏇🏻🏊‍♂️👂📸📹🥇🏆🏅 #WorldCupPrague #Modernpentathlon pic.twitter.com/msSkbuNX2R

“But I think I can work harder for future success.

Choong's silver came the day after Britain had taken gold and bronze in the women's race thanks to Kate French and Jessica Varley.

The Briton said:  “I went into the final feeling pretty tired after three World Cups in a row, but I just found something I guess.

“We have a huge fan club with so many of our parents out here, and I heard them, having put myself into medal contention.

“When I heard them I thought ‘I’m going to go for this’.”

Racing concludes in Prague tomorrow with the mixed relay.