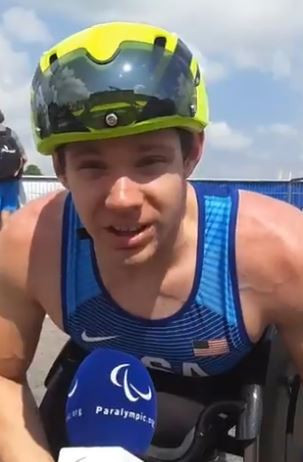 Daniel Romanchuk, the rising star of men’s wheelchair racing, got his own back on Swiss legend Marcel Hug today at the World Para Athletics Grand Prix in Nottwil – setting a world record as he did so.

Having lost to the home racer in the previous day’s T54 1,500 metres, the 20-year-old American – who beat Hug to the London Marathon title last month – got his track revenge over 5,000m, where he clocked a new world mark of 9min 44.33sec.

Hug was just a fraction of a wheel behind, earning a European record of 9:44.37.

Canada’s multiple world record holder Brent Lakatos had to settle for third place, but again, only by fractions as he recorded 9:44.80.

“I certainly could not have done that on my own.”

This was competitive racing of the highest order – and Lakatos left the Swiss venue with his own world record on the day as he clocked 47.34sec in winning the men’s T53 400m.

Nottwil, meanwhile, which had witnessed 15 world records in the previous two years before competition got under way in this Grand Prix, has now seen that total rise to 24 in three years at the end of an astounding weekend of action.

The United States’ seven-times Paralympic gold medallist, Tatyana McFadden, offered another example of her unique quality as she won the women’s T54 wheelchair race in 52.46 and in the process pushed her three nearest challengers into setting continental records.

US double as @TatyanaMcFadden follows up with a win and Americas record in the women's 5000m T54! ⏱🇺🇸👏 #ParaAthletics #grandprix pic.twitter.com/ppTUQHB3RG

China’s Zou Lihong was second in an Asian record of 53.15, home athlete Manuela Schär was third in a European record of 53.23 and fourth place went to Australia’s Eliza Ault-Connell, whose time of 53.37 was an Oceania record.

There was another record-breaking performance in the men’s T34 400m final as Mohamed Alhammadi of the United Arab Emirates won in an Asian record of 50.41, with Finland’s Hnery Manni setting a European record of 51.75 in second place.