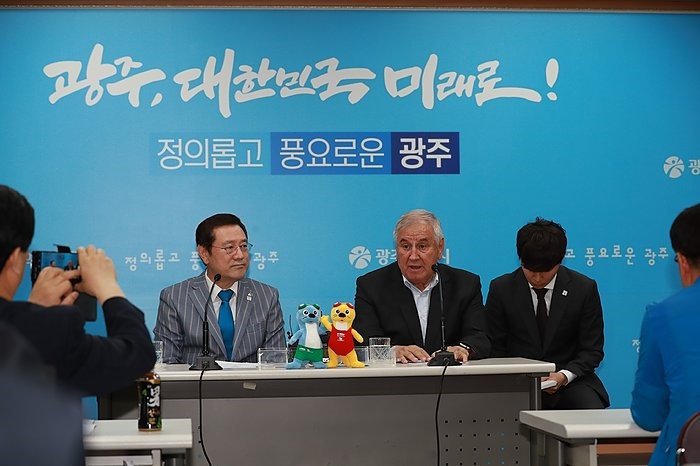 The International Swimming Federation (FINA) has asked North Korea to reconsider its position on competing in July's World Championships, with athletes from the country yet to register for the event in the South Korean city of Gwangju.

FINA and the 2019 World Championships Organising Committee held a press conference to underline the importance of a North Korean presence at the event, which will be held from July 12 to July 28.

The final deadline for registration is June 12.

“At this stage, we don’t have a final decision on North Korea's participation," said FINA executive director Cornel Marculescu.

"We continue working with North Korea and all other National Federations to ensure their participation in Gwangju and consequent possibility of qualifying for the Tokyo 2020 Olympic Games.

"Moreover, their attendance also gives our members access to our development programme tools.

"We have a normal relationship with North Korea's National Federation, and some of its divers were present in the last leg of the Diving World Series, some days ago in London.

"All channels remain open on this issue.”

Mayor of Gwangju and Organising Committee President Lee Yong-sup claimed the event represented a strong commitment to peace in Korea, featuring the motto "dive into peace".

“As President of the Organising Committee, I would like to express the hope of 1.5 million citizens from the city of Gwangju," Lee said.

"They are sincerely expecting North Korea’s participation in the World Championships.

"North Korea presence is crucial for the success of this event as the motto of the competition is ‘Dive into Peace’.

"We would like to emphasise this message to the world.

"Last February, ministers from the two countries met with the IOC in Lausanne and this issue was discussed, but up to now we don’t have any answer from the North Korean side."

The World Championships is set to be attended by athletes from more than 190 nations.

In recent times, South and North Korea have displayed sporting unity at a series of events.

The two countries are interested in jointly holding the FIFA 2023 Women's World Cup and 2032 Olympic and Paralympic Games.