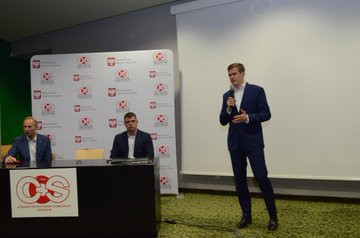 Polish Sports Minister Witold Bańka has been given another boost in his bid to become the next President of the World Anti-Doping Agency (WADA) after he received the support of the European Union (EU) and its member states.

The 34-year-old former athlete, one of three candidates to replace Sir Craig Reedie as head of the global anti-doping watchdog, claimed the EU and its member countries gave him their "official backing" at a meeting in Brussels.

It does not guarantee European members will vote for Bańka when the public authorities within WADA meet in Montreal on Tuesday (May 14) to decide who becomes the fourth WADA President.

But it, nevertheless, provides further impetus to Bańka's campaign in the build-up to next week's crucial decision.

Dominican Republic's former marathon swimmer Marcos Diaz and WADA vice-president Linda Helleland are also standing, although the Norwegian is doing so without the support of her own continent and has little chance of success.

"On top of the Council of Europe’s support, I have just received the official backing of the EU and all its Member States in the election of the future President of the World Anti-Doping Agency.

"Thank you for your trust.

"Together, we can make big changes."

In February, Bańka, a Summer Universiade gold medallist in the 4x400 metres, was approved as Europe's candidate by the Council of Europe.

It was widely expected after the Ad-Hoc European Committee for WADA recommended putting Bańka forward in January.

Great news from Brussels. On top of the Council of Europe’s support, I have just received the official backing of the EU and all its Member States in the election of the future president of the World Anti-Doping Agency.Thank you for your trust! Together, we can make big changes!

Bańka's manifesto includes a pledge to establish an anti-doping solidarity fund, which he claims will "help build a strong network of National Anti-Doping Organisations and to finance capacity building and partnership projects at the national level".

The public authorities hope to reach a consensus on who should be the next President at the May 14 meeting.

A secret ballot will be held if this is not possible, where each member of the WADA Foundation Board representing one of the five regions will have one vote.

It means that 18 members of the Foundation Board will have a chance to participate in the voting process, comprising of five from Europe, four from the Americas and Asia, three from Africa and two from Oceania.

The public authorities want their chosen candidate to shadow the current WADA administration before Sir Craig officially steps down during the World Conference on Doping in Sport in Katowice in Poland from November 5 to 7, where there will not be a formal election.