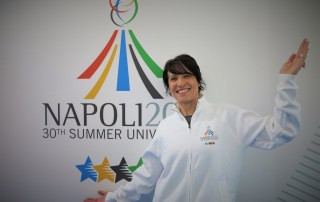 Campania President Vincenzo De Luca offered the opportunity to Di Centa with confirmation of her appointment coming less than two months before the start of the multi-sport event.

"Twenty-five years after the Lillehammer medals, I enthusiastically welcomed the invitation of the President of the Campania region, Vincenzo De Luca, to be part of the great team of the Universiade Napoli 2019," Di Centa told Agenzia Nazionale Stampa Associata.

"Convinced of the importance of sport and study for young people, I will endeavour to promote these values and communicate them well beyond the individual sporting moments of the event."

She was also the overall women’s champion on the International Ski Federation Cross-Country World Cup tour in 1994 and 1996.

Away from sporting competition, Di Centa became the first Italian woman to reach the summit of Mount Everest in 2003.

A member of the CONI Executive Board since 2000, she also served as a member of the International Olympic Committee from 1999 to 2010.