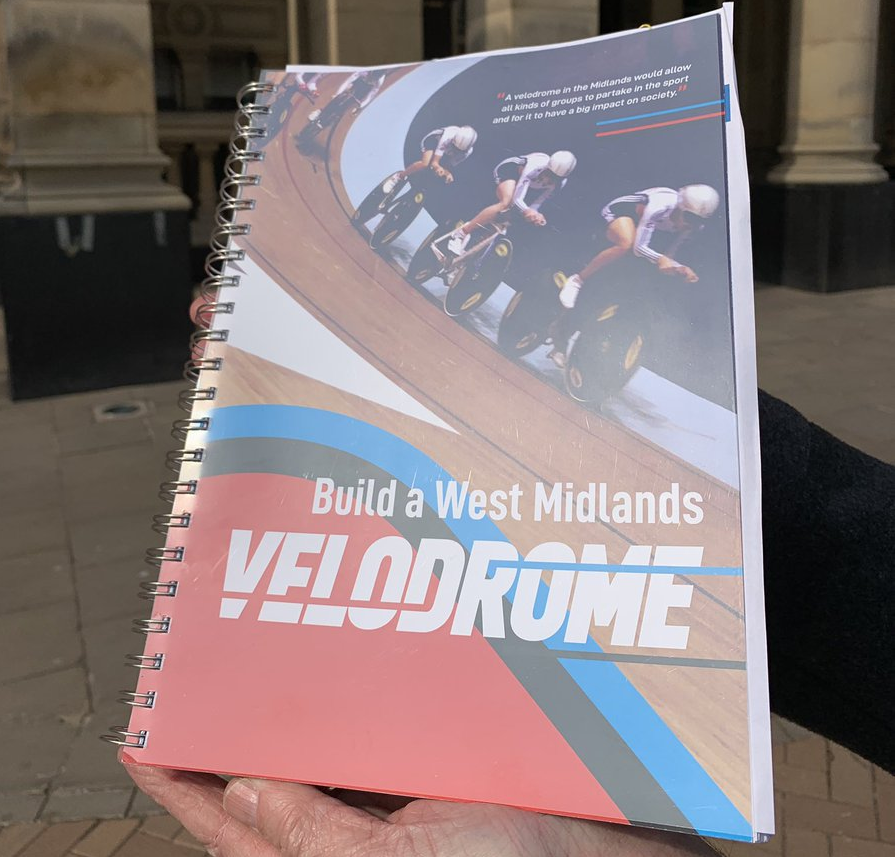 Campaigners for a velodrome hope a compromise proposal can be put forward to ensure a legacy for cycling from the Birmingham 2022 Commonwealth Games.

A petition calling for West Midlands Velodrome to be constructed by Birmingham City Council was last week handed over to Ian Ward.

The campaign began after Commonwealth Games organisers announced Lee Valley VeloPark in London would host 2022's track cycling events, despite being 130 miles away from Birmingham.

It appears petition organisers believe the Commonwealth Games cycling will not take place in Birmingham, after stating they accept neither Sport England nor British Cycling support building another competition-standard venue.

Attentions have been turned towards a "more modest training and development velodrome", which it is claimed will leave a strong legacy from the Games.

The campaign has been led by Viner and Charlie Dickens, who have persisted in their bid to see a velodrome built after it was revealed Birmingham City Council had not conducted a feasibility study into the idea before settling on London as their preferred venue.

Dickens and Viner suggested that if the competition is not held in Birmingham then a "training stadium" should be built instead for competitors to prepare, which could then be used by local clubs after the Games.

Dickens has told the Birmingham Mail the campaign is ongoing, following the handover of the petition.

He expressed hope a compromise proposal could be put forward but admitted the campaign needed the support of British Cycling, the national body, to achieve a positive result.

Today was the big day! We handed in our petition to #Birmingham Council leader Ward (who was very supportive) alongside #cycling legend Hugh Porter.

Thanks to everyone who has signed.

Electronic copies of the petition will soon be made available. pic.twitter.com/yKWGLSOlB6

"The main thing is that they said they didn’t want a 4,000-seater competition velodrome," Dickens told the Birmingham Mail.

"And with the feasibility study, it would be nice if they could come up with some kind of compromise proposal, that still allows for cycling provision to still be improved in the area, and still has some kind of legacy from the Commonwealth Games.

"At the minute there’s not really any plans for anything, so we need to bring British Cycling round to this way of thinking.

"Because British Cycling is the governing body, nothing will get done without their support anyway.

"We could get a million signatures, but if the governing body don't want to do anything, then it won't get done.

"This is an ongoing campaign that continues to garner support, particularly because we have widened that net of people that are involved.

"Hopefully, there will be enough to convince them, which is obviously the aim, and we’re doing this to put the best possible case forward and then see what happens."

Andy Street, Mayor of the West Midlands Combined Authority, stated in January that he would hold talks on plans to construct a velodrome in Birmingham as part of legacy plans.

Street admitted, however, that the funding for such a project could not come from the Games' budget, with all the cash already allocated.

He stated any project would have to be funded separately, "something which as yet I do not see forthcoming".

Earlier this month, Council’s Planning Committee approved plans for Sandwell Aquatics Centre to be built for the Games.

The leisure centre is expected to be completed by 2021 and will host the swimming and diving events during Birmingham 2022.

Plans include a 50 metres Olympic-sized competition swimming pool, a 25m diving pool and a studio pool.

The leisure centre will have 1,000 permanent spectator seats with additional seating to be added on a temporary basis for Birmingham 2022.

It will also boast a dry-dive facility, a 108-station gym, a 25-station women’s-only gym, three activity studios, an eight-court sports hall, an indoor cycling studio, a sauna/steam room and a café.