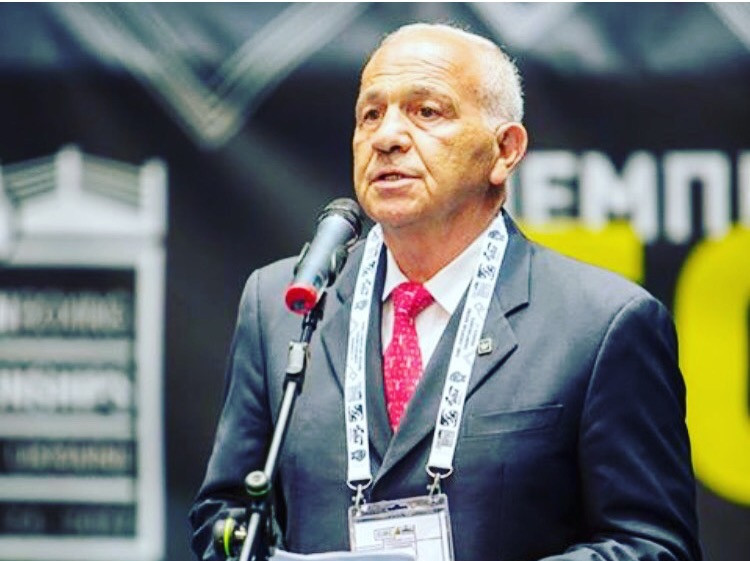 The Italian insists the intention of the working group is "not to overlook the valued institutional role of AIBA, but to engage the IOC and ASOIF (Association of Summer Olympic International Federations)".

In a letter sent to AIBA vice-president Falcinelli earlier this week, Moustahsane said AIBA had been "surprised" by the approach taken by the European organisation after the EUBC Executive Committee formed the working group.

The Moroccan, elected Interim President to replace Gafur Rakhimov, denied the EUBC permission to directly contact the IOC and said the working group was "not the answer".

The EUBC had tried to take the issue into its own hands amid the IOC inquiry into AIBA, which could result in the worldwide governing body being stripped of the right to organise the Olympic boxing tournament at Tokyo 2020.

The organisation claimed it did not want to "remain idle" while the future of boxing within the Olympic Movement was "at risk".

The move made by the Executive Committee suggests the EUBC is concerned by the progress made by AIBA towards maintaining its status as the IOC-recognised body for boxing.

But its efforts were quickly rebuffed by AIBA, representing an escalation in the dispute between the embattled organisation and the EUBC over the sport's Olympic future.

The EUBC Executive Committee said it would ask AIBA to allow it to "initiate a relationship" with the IOC and ASOIF as part of its desperate attempt to ensure AIBA remains the Olympic governing body for the sport.

In response, Moustahsane said it was "completely inappropriate for the EUBC or any individual to address ASOIF or the IOC directly".

Falcinelli has now sought to "clarify certain points" in his letter to Moustahsane.

"Firstly, I would like to reiterate that, on behalf of EUBC EC, I asked for AIBA’s approval of the intention to initiate a productive conversation with the IOC management and ASOIF, in execution of a resolution unanimously passed by the EUBC Executive Committee held in Belgrade on April 19, 2019," the letter reads.

"The intention of the 'working group' is NOT to overlook the valued institutional role of AIBA, but to engage the IOC and ASOIF with the goal of making the voices of athletes and administrators from various continents heard prior to a very important decision."

Boxing will almost certainly feature at Tokyo 2020 in some form but who organises the qualification process and the tournament itself remains unclear.

The IOC Inquiry Committee is due to submit its final report to the Executive Board at its next meeting in Lausanne on May 22.

"Unfortunately, boxers were not invited to the recently-held IOC Athletes Forum and deprived of a chance to express their expectations, but they certainly do not bear any responsibility for the issues that AIBA is charged for," Falcinelli writes.

"They are the core of AIBA, however, and we believe that they may be able to facilitate the negotiations between the IOC Inquiry Committee and AIBA top management in the days preceding the decision of the IOC EB."

AIBA is hopeful recent developments, including Rakhimov stepping aside and a proposal from influential Russian official Umar Kremlev to personally write off AIBA's significant debt, will count in its favour when the IOC makes its decision.

Falcinelli said the working group would be in a good position to further explain and expedite the proposal of Kremlev, vice-president of the EUBC and an AIBA Executive Committee member.

"Finally, I agree with you, we must invest even more efforts into highlighting the positive progress and ongoing reforms within AIBA, but I also believe it is necessary to put in evidence to IOC the huge responsibility we have towards 203 AIBA-affiliated national federations and [their] athletes," he adds.

"Dear Mohamed, I am sure that my clarification makes sense to you.

"As always, we rely on AIBA's assessment and comply with its decisions."

The Asian Boxing Confederation (ASBC) has declared its support for AIBA, highlighting how the EUBC's position is at odds with other continental bodies.

The AIBA Compliance Commission task force recently reviewed a complaint made by the ASBC Executive Committee regarding the alleged failure of previous ASBC President Serik Konakbayev of Kazakhstan to turn over archival and financial documents to the new leadership.

The Commission recommended the AIBA Executive Committee forward the case to the Disciplinary Commission along with a recommendation that Bektenov be provisionally suspended as an AIBA member due to his "attempts to meet with national federations in violation of the disciplinary code".

A bitter row between the AIBA leadership and Konakbayev deepened in February after the worldwide governing body claimed the Kazak had "set out to destroy" evidence from his period as President of the ASBC.

The issue was raised by Anas Alotaiba, who succeeded Konakbayev as ASBC President in November, in a report from the continental governing body presented to the AIBA Executive Committee during its meeting in Istanbul.

According to AIBA, the ASBC "identified a major knowledge transfer issue" and accused Konakbayev of attempting to delete data, emails and technical information during his time as President.

Konakbayev, who has been at loggerheads with AIBA since he was beaten in the Presidential election by Rakhimov, allegedly claimed data protection laws of Kazakhstan prohibited the information being transferred to the new ASBC leadership.

AIBA confirmed an investigation, led by a dedicated task force, had been launched with a view to recommending possible disciplinary actions.

The allegations came after AIBA began investigating a breakaway group of "rogue Kazakhstani individuals" who offered to help manage the qualification process and run the Olympic boxing tournament at Tokyo 2020 without the worldwide governing body.