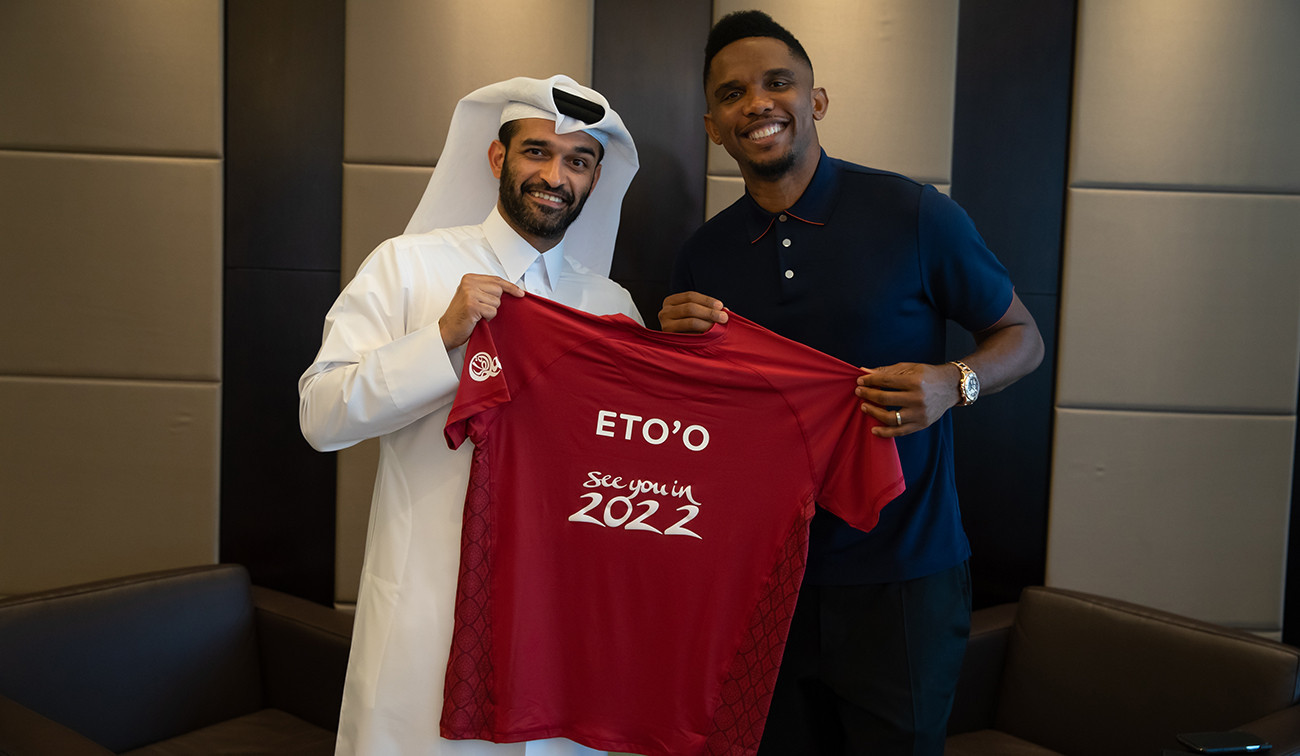 Samuel Eto’o, one of the most decorated players in world football, has joined the Supreme Committee for Delivery and Legacy (SC) – the organisation responsible for delivering tournament infrastructure for the 2022 FIFA World Cup in Qatar and its associated legacy programmes – as a global ambassador.

Eto’o has won 15 major honours during his glittering career to date, a haul which includes three UEFA Champions League victories, four league titles across spells in Italy and Spain with Inter Milan and Barcelona, respectively, and one FIFA Club World Cup.

In August 2018, he joined Qatar Stars League side Qatar Sports Club and made a new home in the host country of the next FIFA World Cup.

During a special signing ceremony with SC secretary general Hassan Al Thawadi, he became part of the journey on the road to 2022.

"It’s a great honour for me to be an ambassador for the SC and hope I am able to deliver what is expected of me," said Eto’o, a four-time African player of year.

"Football goes much further than politics and it’s important that football travels the world because it’s everywhere, it’s an incredible social force.

"It has an impact on our lives even if some do not like football, we are always paying attention to football and I am happy that Qatar is and will be the face of it for a month during the World Cup, and Qatar will also be the face of the Middle East."

With a particular focus on workers' welfare projects, Eto’o will assist and support the SC in the delivery and implementation of its initiatives as it attempts to deliver an outstanding FIFA World Cup and ensure the legacy of the competition is long lasting and far reaching.

The legendary striker, who in 1998 appeared at his first FIFA World Cup at the age of 17, has also made an impact away from the professional game.

In 2017, he was named the United Nations International Children’s Education Fund goodwill ambassador for Cameroon.

Additionally, in March 2006 he launched the Samuel Eto’o Foundation and has since built football schools across Africa with the goal of encouraging young people to have access to sporting facilities to hone their skills, while also providing the frameworks required for them to continue their studies.

The Foundation also provides healthcare and social integration opportunities for those who attend.

"It always humbles me to know I can bring a smile to someone’s face with small acts of kindness like lending an ear," Eto’o said.

"What may seem benign to us, can mean the world to others.

"I told myself I have to share my experience with some and above all, the grassroots in Cameroon in particular and in Africa in general.

"I can establish football schools which will allow young people to overcome obstacles which they might face in Europe.

"This is why I embarked on this beautiful project that excites me every day and I’m happy because I have some players who play with some of Europe’s biggest clubs.

"It gives pride for me as the face of the Foundation but all those backing me have also played a big role in giving the youth this opportunity."

Commenting on the announcement, Al Thawadi welcomed Eto’o to the team.

"Samuel is one of the most successful footballers in the history of the game and we welcome him to join us on this unique journey," he said.

"As well as his remarkable achievements on the field, what makes him stand out is the commitment he has shown to using his profile to effect positive change away from the professional game.

"We have always been steadfast in our commitment to ensuring this World Cup is not only about the 28 days of on-pitch action, but about the impact it will have across the Arab world and beyond, for generations to come.

"I am confident that working alongside someone of Samuel’s calibre, stature and character can only help us to achieve these goals together."

FIFA is set to expand the size of Qatar 2022 from 32 teams to 48 after the FIFA Council agreed the idea was "feasible" at a meeting in Miami last month.

Football’s global governing body has been considering broadening its flagship tournament for some time and it has already been confirmed the 2026 edition will feature 48 teams.

After analysing a feasibility study, the Council has agreed expanding the 2022 edition could work, so long as countries other than Qatar, the current sole hosts, agree to help.

FIFA President Gianni Infantino has been asked to confirm that any country being considered as a co-host of the 2022 World Cup complies with the governing body's new human rights standards.

Before the FIFA Council meeting in Miami, Amnesty International and a coalition of non-Government organisations, trade unions and fans' and players' groups told the official about his "corporate responsibility".