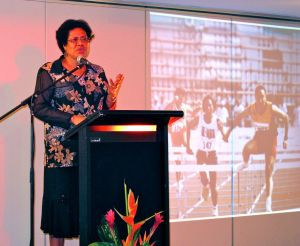 The PNG Olympian Association (PNGOA) was first initiated in 2017 by the Papua New Guinea Olympic Committee (PNGOC) and is currently being headed by an Interim Committee, as reported by Papua New Guinea Post-Courier.

Former Olympic heptathlete Iammo Launa is currently Interim President, having represented Papua New Guinea at the the1984 and 1988 Olympic Games in Los Angeles and Seoul respectively.

The Interim Committee will oversee the full establishment of the PNGOA.

It has been invited to attend its first World Olympian Forum in Lausanne April 15 to 17, which will bring together 150 Olympians from over 120 National Olympians Associations.

Attendees will participate in sessions and activities including workshops, presentations, networking, dialogue, and cultural celebrations.

The first World Olympian Forum was held in Moscow in 2015.

When fully established, the PNGOA will look educate people on Olympic ideals and strengthen the Olympic Movement, with PNG Olympians participating in Olympic activities in the country and serving as Olympic role models.

"It intends to mobilise PNG based Olympians to reach out to communities by spreading the Olympic movement ideals, values and philosophies to encourage the young generation to become elite sports persons and productive citizens," Launa said.

The PNGOA will work in partnership with the PNGOC, PNG Athletes Commission, national governing bodies and other stakeholders.

Papua New Guinea have been sending athletes to the Olympic Games since Montreal 1976 but is yet to win a medal.