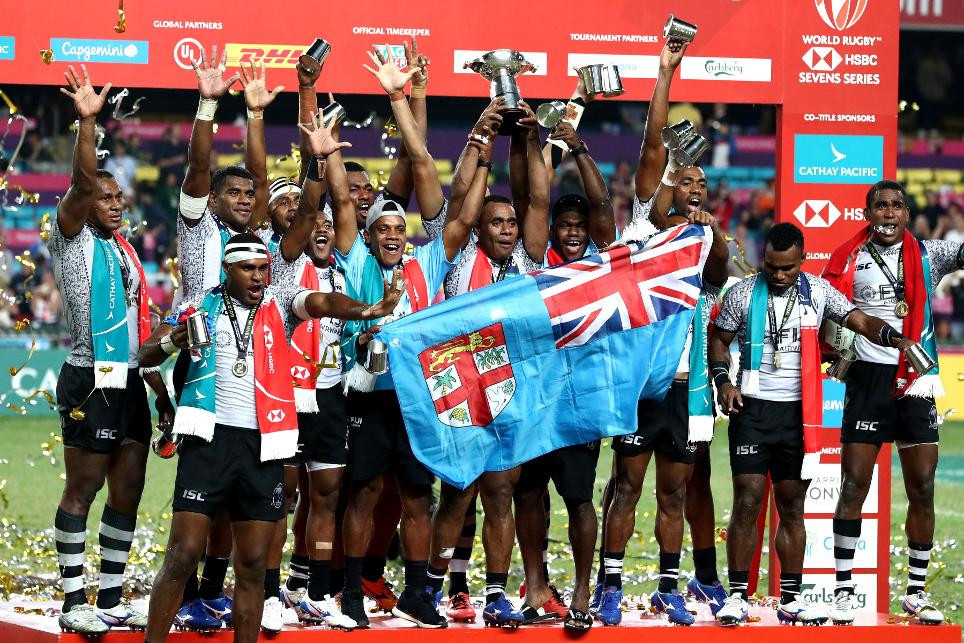 Jerry Tuwai, the only current player to have played in all four of the previous finals for Fiji, proved hugely influential in a match where Aminiasi Tuimaba scored twice and Vilimoni Botitu also crossed in front of 40,000 fans in Hong Kong Stadium.

France were playing in their second cup final of the season, having finished as silver medallists in Vancouver.

"It's a fantastic feeling and I'm sure it will sink in over the next two or three days," said Fiji's head coach Gareth Baber, who went on to reference last month’s shooting at a New Zealand mosque that left 50 dead and 50 injured.

"I think that all of this has been in the backdrop of what happened in Christchurch.

“Our hearts and our thoughts go out to all of those families and this is a dedication to them."

With three rounds to go in the HSBC World Rugby Sevens Series 2019, the tournament victory means Fiji jump ahead of New Zealand in the standings and sit in second.

The United States remain on top with 130 points, having earned bronze in Hong Kong with a 22-10 win over Samoa, while South Africa, beaten here by Argentina, are fourth on 99 points, nine ahead of England in fifth.

At the end of all 10 rounds of this year's World Series, the top four teams will confirm their places at the Tokyo 2020 Olympic Games.

Japan are the only side guaranteed to play due to automatic qualification as the host nation.

Earlier in the day, Ireland secured a place as one of the 15 core teams on the World Rugby Sevens Series 2020 after beating hosts Hong Kong 28-7 in the final of the men’s annual world series qualifier.

After three days of action, Anthony Eddy's side proved to be worthy winners following six straight victories – thus making up for their defeat at the semi-final stages last year.

Having earned their place on the HSBC World Rugby Sevens Series 2020, Ireland can look forward to playing at the top level of rugby sevens ahead of Tokyo 2020.

Ireland will aim for Olympic qualification when the European regional qualification tournament takes place in Colomiers, France from July 13 to 14 this year.

Scotland beat Japan for a second time in the tournament and clinched the Challenge Trophy thanks to their 26-24 success.

In the fifth-place final, Argentina overturned a series of three successive losses to New Zealand to win 21-14.

At the end of the match, the UL Mark of Excellence was handed to the All Blacks Sevens co-captain Scott Curry.

The award marked the solidarity shown to the side from a number of teams over the three days in response to the recent shootings in the country.