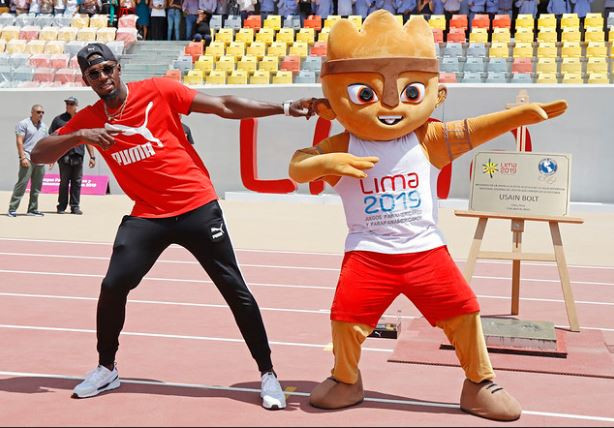 Usain Bolt has made his mark on another international arena while touring the renovated stadium that will host athletics at the 2019 Pan American and Parapan American Games in Lima.

Jamaica’s multiple Olympic and world sprint champion, who retired in 2017, left an imprint of his palms on a specially prepared cement block, leaving a memento that will go on display in the stadium.

"Having this chance to tour this stadium is spectacular," said Bolt.

"In Jamaica we do not have a track like this to train.

"The most important thing is that it will be for the next generation.

"They have to appreciate these venues that will be spectacular for the future. I am happy and this track is wonderful for the Peruvians.

"I hope they use it and set many records – it is a track of international level and quality."

Bolt, winner of eight Olympic gold medals and 11 World Championship titles and who still holds the world records for the 100 and 200 metres, never actually competed in the Pan American Games during his career.

But organisers were delighted he had helped give their event a lift with this visit.

"This is a special event for us," Neuhaus said.

"The presence of an international icon in the world of sport such as Usain Bolt says, clearly, the importance that Lima has as the host city of the continent's top sporting event.

"With Bolt in Lima, we send a great message to all of the Americas and the entire World: everyone wants to be part of these Games, and in Lima, as we always say, 'Let’s All Play!'"

The new 6,000 capacity stadium, on which work is now complete in time for the Pan American Games, due to start on July 26 and finish on August 11,has yet to be inaugurated.

The track is made of materials similar to those used for the 2012 Olympic Games in London and that will be used for Tokyo 2020 next year.

The International Association of Athletics Federattions subjected the surface of the track to various laboratory tests and gave it Level 1 Certification, concluding it was more than capable of hosting the fastest athletes of the Americas in less than four months.