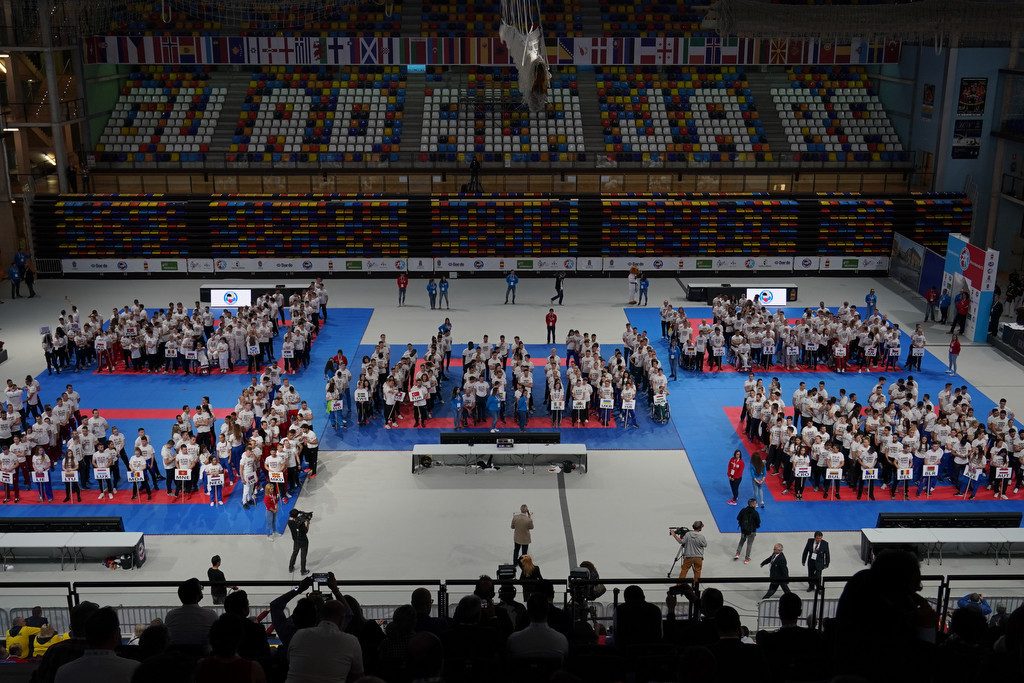 More than 500 athletes performed a show of unity at the European Karate Championships in Guadalajara to ask Paris 2024 and the International Olympic Committee (IOC) to include their sport at the Olympic Games in the French capital.

During the Opening Ceremony, athletes wore t-shirts emblazoned with the phrase “Karate Olympic Sport” as part of a wider campaign launched by the World Karate Federation (WKF) to get karate into the 2024 Olympic Games.

“This event is a milestone in the history of European Karate,” WKF President Antonio Espinós said.

“First of all, it is a step forward towards Tokyo 2020 and it is the main qualification tournament for the European Games.

“Besides, it gives us the opportunity to demonstrate that we are all together in our goal of achieving inclusion in Paris 2024.”

Karate will feature at Tokyo 2020 next year where the sport will make its Olympic debut, but it has not been chosen for the Paris Games.

Instead, the Organising Committee selected sport climbing, skateboarding and surfing – all part of the Tokyo 2020 programme – alongside, controversially, breakdancing.

The International Olympic Committee (IOC) also left karate out when it proposed the same four sports for inclusion after its Executive Board meeting this week.

Having not been chosen by Paris 2024, karate’s inclusion at the Games is not likely, but the WKF is refusing to give up on its aim.

“With this demonstration of unity, with our many values, with our excellence in event organisation and in governance, and with our unparalleled popularity all over the world, we prove we deserve to stay an Olympic sport,” Espinós said.

“Karate is an Olympic sport.”

According to the FFK, the meeting aimed to convince the Paris 2024 Organising Committee that karate should be included.

Back at the European Championships, all 564 athletes wore white Olympic t-shirts.

A “belt of hope” action was also launched, with every karateka wearing a multi-coloured belt featuring the colours of the Olympic rings during their bouts.

It all comes alongside online campaigns, #Karate2024 and #TsukiForKarate which the WKF says has mobilised “hundreds of karate fans” across the world.