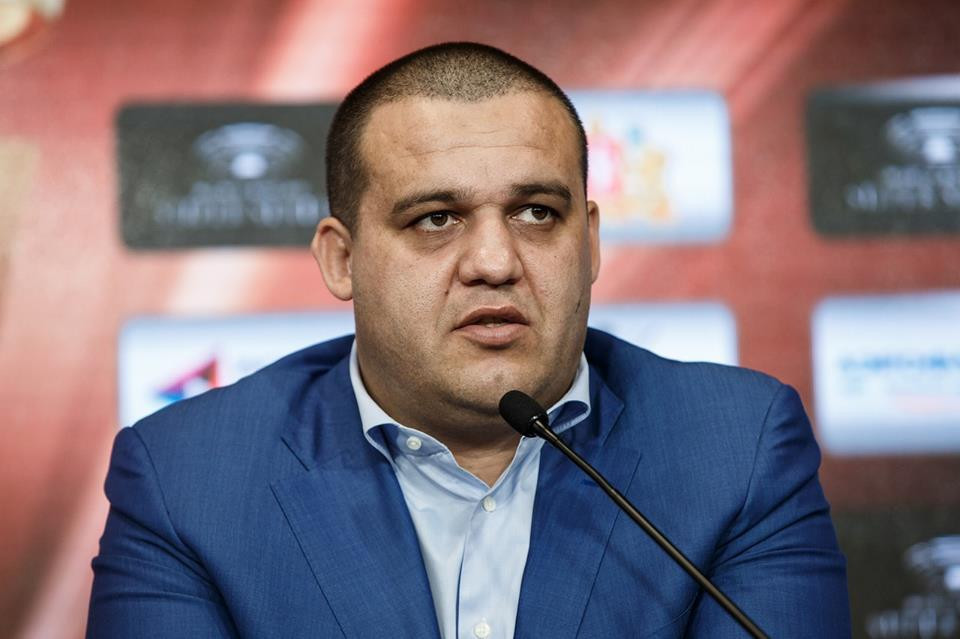 Russian Umar Kremlev has made an astounding offer to write off the International Boxing Association's (AIBA) $16 million (£12 million/€14 million) debt if the organisation is allowed to remain in charge of the Olympic tournament at Tokyo 2020.

Kremlev, a member of the AIBA Executive Committee who recently declared his intention to stand for President, made the proposal in a letter sent to IOC President Thomas Bach and Nenad Lalović, chairman of the inquiry into AIBA.

A spokesperson for the Boxing Federation of Russia (BFR) claimed Kremlev would use his own money and "investments" to finance the move to wipe AIBA's debt, described as "significant" by executive director Tom Virgets in a statement yesterday.

The BFR secretary general, a growing influence in the sport, also made a plea for the IOC to "save AIBA in the Olympic Movement".

AIBA is set to learn whether it can organise and run the Olympic boxing event at Tokyo 2020 when a final report from the Inquiry Committee is published on May 22, it was announced today.

An interim report from the IOC Ad-hoc Committee was presented to the IOC Executive Board during its latest meeting here.

The IOC refused to comment on the recommendations or details of the report, revealing only that the full document would be given to the Executive Board at its next meeting in Lausanne.

In a statement, AIBA executive director Tom Virgets claimed the delay caused by a lack of a formal decision from the IOC was a "complete disaster for boxers around the world who are being left in limbo without any support or access funding".

AIBA claimed it was "very surprising that the IOC are unable to provide a conclusive decision regarding boxing’s Olympic future at this time".

The organisation claimed the IOC had given AIBA assurances that an official hearing and inquiry would be made before the Executive Board meeting but instead had demonstrated "indifference towards the process and preparation of athletes for the Games".

"We don’t understand why we can’t put the well-being of boxers ahead of anything else, it is time to move on - our boxers are waiting, our officials are waiting and our fans are waiting," said Virgets.

In his letter, Kremlev said he was "ready to close the debts of AIBA in full so long as our favourite sport remains on the Olympic programme".

"I decided to close the AIBA debts in full and also allocate money for the development of the organisation," he wrote.

"I would like to do this for boxing to remain in the Olympic Movement and so that financial problems are no longer one of the reasons why the future of boxing would be under threat.

"With this letter, I ask you to support boxing and save AIBA in the Olympic Movement.

"I am ready to begin negotiations as soon as possible."

Kremlev claimed he was "concerned" with the crisis surrounding AIBA, triggered by the election of Gafur Rakhimov as President in November and which has plunged the organisation's involvement in the boxing event at Tokyo 2020 into doubt.

Last week, Rakhimov, who remains on a United States Treasury Department sanctions list as "one of Uzbekistan's leading criminals", announced he would step aside as AIBA President.

It is unclear whether this is a permanent or temporary move.

The 67-year-old's decision was accepted by AIBA, which released a glowing statement claiming the organisation had made great progress under him.

Rakhimov and AIBA hope his decision will appease the IOC, which claims its concerns with the world governing body run deeper than the election of the Uzbek.

Mohamed Moustahsane, head of the African Boxing Confederation, is set to be appointed as Interim President.

Kremlev, who called the IOC "stupid" when it froze planning for the boxing competition at Tokyo 2020 and launched the inquiry, is the only official to have publicly revealed plans to stand for the role on a permanent basis and would be among the favourites in the event Rakhimov does not return.

He was elected as a member of the AIBA Executive Committee at the same Congress in Moscow last November where Rakhimov was voted in as President.

Since then, he has been appointed head of the AIBA Marketing Commission and elected first vice-president of the European Boxing Confederation.

The financial situation is among the key concerns the IOC has with AIBA.

Virgets admitted the future of the organisation would be dependent on Olympic funding and claimed the debt would be eliminated by 2024 if the IOC retained AIBA as the Olympic governing body.

He claimed the organisation would be able to reduce its debt by an additional $4 million (£3 million/€3.5 million) to $5 million (£3.5 million/€4.5 million) over the next 12 months "once the IOC allows AIBA to move forward".