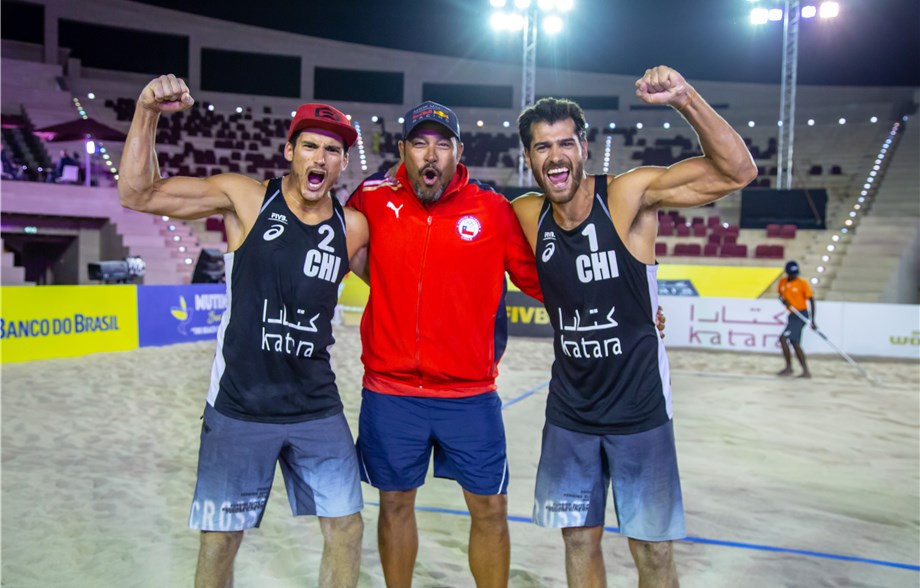 They earned a 21-15, 21-15 scoreline against the 39-year-old Americans, who were playing their first tournament since last August, in this Katara Beach Cup match at Katara Cultural Village.

They thus added their first four star gold to the Sydney three star tournament they won on Sunday(March 10), having entered the qualifying round in Qatar the day after landing from a 14-hour flight.

Seeded 18th, they had beaten higher seeded teams from Norway, Brazil, Italy and Poland to reach the final.

"It was a crazy two weeks, and we are so proud of our team, our family and our country," Esteban Grimalt said.

"I don’t have words to describe our feelings right now.

"When we started on the World Tour nine years ago it was against Dalhausser [and Todd Rogers] and now many years later we have beaten him in a final.

"It is a dream come true for us, but we want more and to keep improving."

He has many years of experience coaching on the FIVB Beach Volleyball World Tour and is now bringing it to bear on the cousins.

"He is an excellent coach," Esteban Grimalt said.

"He has given us so many new ideas and gives us so much information before every game.

"Because of that we are more prepared before every game.

"He is part of our team and it is a dream for all of us."

For Dalhausser and Lucena the silver medal is their first World Tour medal since the won the Fort Lauderdale five star tournament in March 2018.

Dalhausser revealed earlier in the week that he had been contemplating retirement before thinking better of it in recent weeks, and he and his partner - who lost only one set in five matches en route to the final - are now targeting Tokyo 2020.

It was the third meeting for these teams on the FIVB World Tour, with the Americans winning the previous two matches in 2016  and 2017.