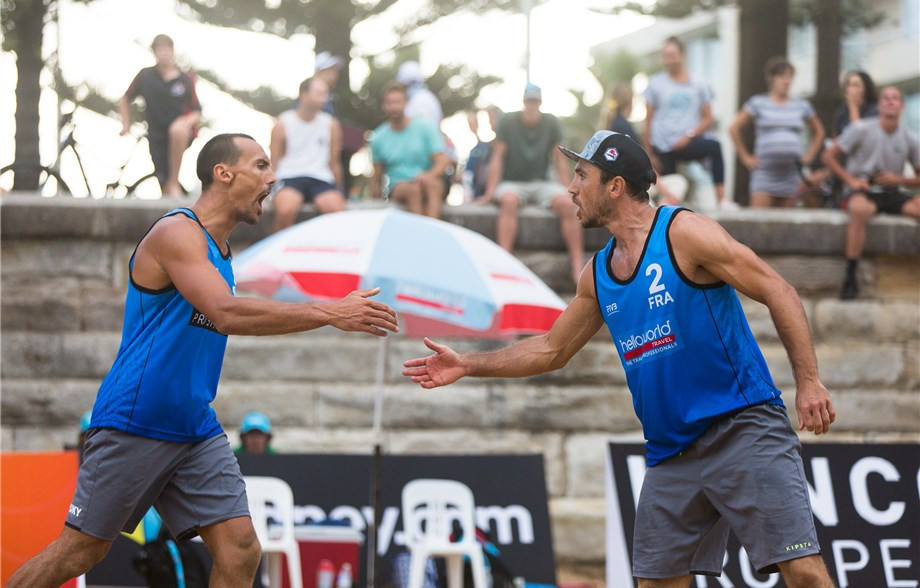 A dislocated shoulder suffered in play by France's Youssef Krou prevented him and his partner Edouard Rowlandson continuing with their men's semi-final at the International Volleyball Federation Beach World Tour three-star event in Sydney.

Second seeds Marco and Esteban Grimalt of Chile, who were 11-9 up in the first set when the injury occurred, will now play Italy's Enrico Rossi and Adrian Carambula in tomorrow's final.

"We played a little bit better in blocking until that unfortunate incident on the court," Esteban said.

"It's difficult to be in a winning situation when your opponent gets hurt, so I want to wish him to get well soon."

Rossi and Carambula, competing together for the first time, earned a 21-16, 21-16 win in their semi-final against the United States' Stafford Slick and William Allen.

The Italian pair have made a big jump from qualification to the final, remaining unbeaten in seven matches.

"We had a good month in Rio before coming here and we felt good about it," Carambula said.

"This just confirms all of the work that we've been putting in and we are happy that we are here.

"We have very good balance.

"I bring a little bit of fire while my partner is very calm, so really balance each other out.

"And when I am missing the fire, he's the one that brings it out in the team."

Australia's defending champions in the women's tournament, Taliqua Clancy and Mariafe Del Solar, made an exit in the second round, where they were drawn against German second seeds Karla Borger and Julia Sude of Germany.

But home hopes were upheld by Nicole Laird and Becchara Palmer, who sparked the emotions of the Manly Beach crowd as they earned a 21-12, 21-19 win over Japanese pair Megumi Murakami and Miki Ishii in the quarter-finals.

"We knew that we could do some good stuff in this tournament," Laird said.

"As far as Taliqua and Mariafe are concerned, they really played with some good quality volleyball this week and they really had a tough draw."

In other quarter-final matches, Americans Brooke Sweat and Kerri Walsh Jennings redeemed themselves by beating Greece's Vasiliki Arvaniti and Panagiota Karagkouni 28-26, 21-18 after losing to them in the pool play round.

And the progress of Borger and Sude was halted by US pairing Betsi Flint and Emily Day, who beat them 21-17, 21-17.

Wang Fan and Xia Xinyi emerged victorious in the all-Chinese match-up against Lin Meimei and Zeng Jinjin as the latter conceded due to injury.

There was some consolation for Clancy and Del Solar as they were among 11 Olympians, also including Walsh Jennings, recognised by The World Olympians Association and presented with their post-nominal OLY initials.