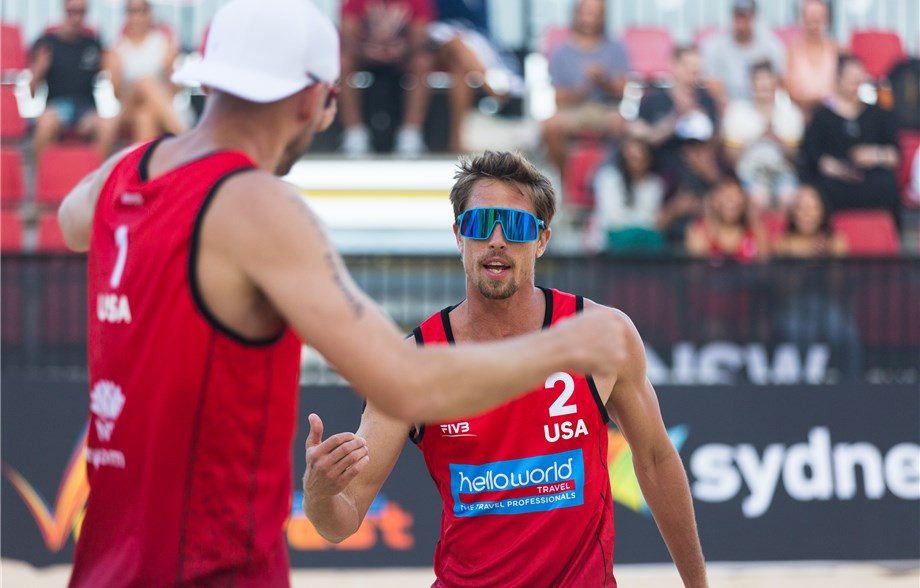 "It's difficult to play in this tournament because there are really great teams," Gibb said.

"We are just excited to move on to Saturday and see whether we get to the medal rounds.

"That's what our goal is and that’s what we're headed for."

Meanwhle second-seeded Marco and Esteban Grimalt of Chile remain undefeated in the tournament after three matches.

The Chilean duo came up with another straight-sets - 21-15, 21-18 - win against Austrian pair Tobias Winter and Julian Horl in the second round.

Russians Taras Myskiv and Valeriy Samoday likewise had straightforward victories in their three matches, including their 21-17, 21-17 win over Brazilians George Souto Maior Wanderley and Thiago Barbosa.

John Hyden and Ryan Doherty and Stafford Slick and William Allen of the US, Mart Tiisar and Kusti Nolvak of Estonia, Youssef Krou and Edouard Rowlandson of France and Adrian Carambula and Enrico Rossi of Italy all won in tiebreakers to advance to the quarter-finals.

In the women’s event, the waves at Manly Beach are being made by Greek pair Vasiliki Arvaniti and Panagiota Karagkouni, who are on a four-match winning streak.

Arvaniti and Karagkouni topped Pool F with a 17-21, 21-17, 15-9 win over China's Lin Meimei and Zeng Jinjin, following their two victories in the qualification round and their stunning victory over the United States' Kerri Walsh Jennings and Brooke Sweat in first round of pool play.

“Kerri is the best player in the world and we respect her a lot," Arvaniti said.

"We played without fear against her team yesterday.

"It was a great start for us in pool play by beating a great team."

Against the young Chinese pair, the Greek duo counted on their experience to come up with a victory in the third set.

"It was really great because we won our pool," Karagkouni said.

"We were nervous because they were young, free and they had nothing to lose.

"We came from qualification and had momentum, but I think at the last moment of this match, it was our experience that counted."

Top seeds Taliqua Clancy and Mariafe Artacho Del Solar of Australia, Michaela Kubickova and Michala Kvapilova of the Czech Republic, Varapatsorn Radarong and Khanittha Hongpak of Thailand, Marta Menegatti and Viktoria Orsi Toth of Italy, Megumi Murakami and Miki Ishii of Japan, and Betsi Flint and Emily Day of the United States swept their matches in their respective pools to advance to the winners' bracket

Sweat and Walsh Jennings rallied from a set down to win 18-21, 21-17, 15-11 against France's Alexandra Jupiter and Aline Chamereau to move to the next round.