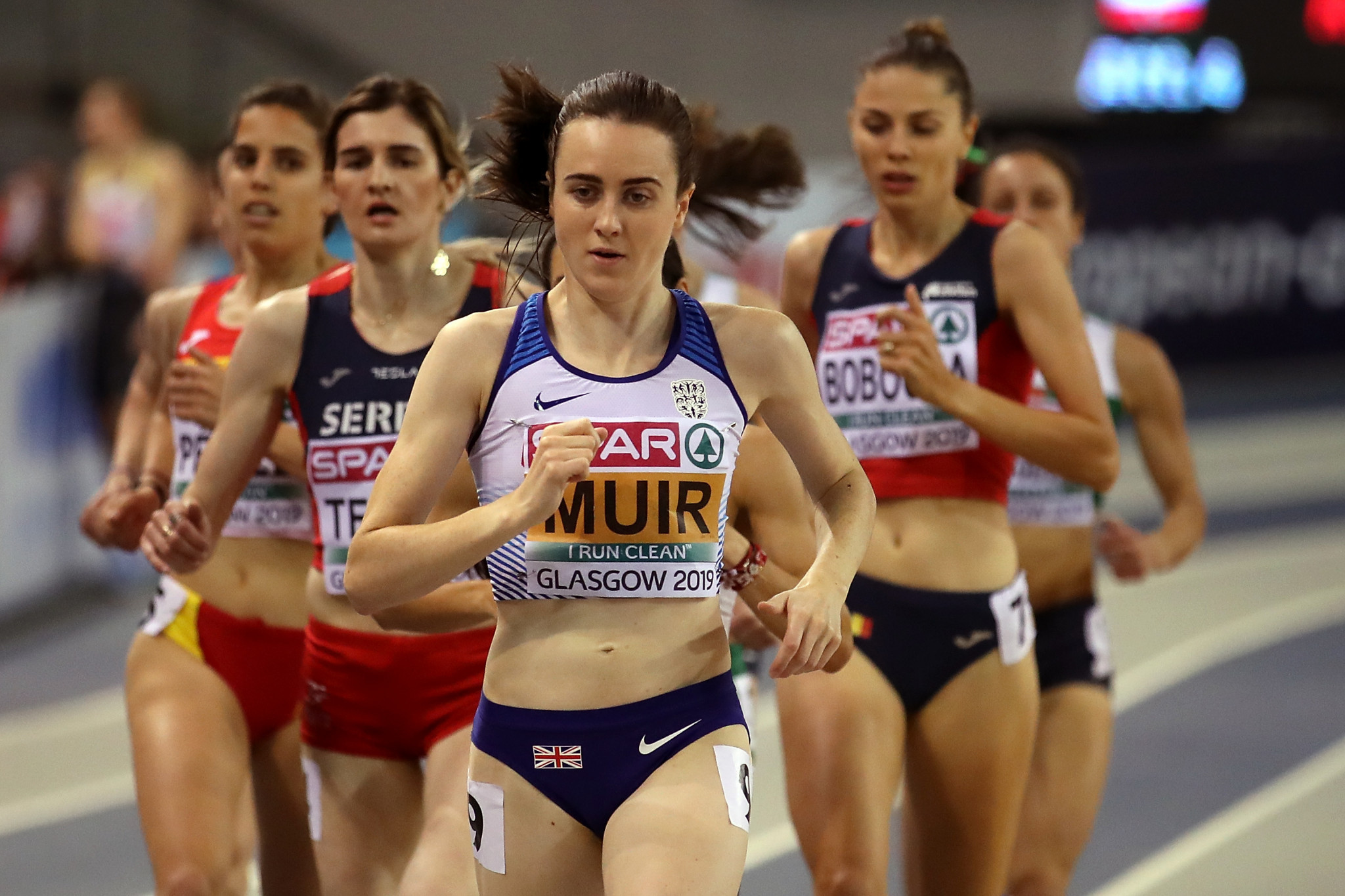 Scotland's own Laura Muir successfully completed the defence of both her European Athletics Indoor Championship titles here as, with the 3,000 metres gold already secured, she produced another performance of pulverising power and intent to win the 1,500m in 4min 5.92sec.

A similar ambition proved a task too far for the Norwegian wonder-boy Jakob Ingebrigtsen, the European 1,500m and 5,000m champion outdoors last year, who was unable to add the indoor 1,500m gold to the one he had secured on this track over 3,000m yesterday as the event drew to a close.

Poland's wily 31-year-old Marcin Lewandowksi, who had taken silver behind the Norwegian in last year's outdoor race in Berlin, struck decisively at the bell to reverse that order, coming home in 3:42.85.

Ingebrigtsen had to settle for a medal of an unfamiliar hue as he clocked 3:42.23, with bronze going to early leader Jesus Gomez of Spain in 3:44.39.

But the image of the night was that of Muir, ponytail flailing from side to side, pale face intent, driving for home over the final two laps.

She covered the last 400m in 57.58, rapidly creating a lead of around 30m by the time she crossed the line to cacophonous approval.

Muir contributed half of Britain's golds here, placing them second in the final medals table behind Poland, whose women earned gold number five for their nation in the 4x400m relay, the last event on the programme.

In terms of overall medals, however, the hosts could claim top billing, with four golds, six silvers and a bronze - five more than their nearest challenger.

Looking on with approval throughout this final programme of entertainment was the International Association of Athletics Federations President Sebastian Coe.

An effort of 6.99m, equalling the longest in the world this year, enabled Serbia's Ivana Spanovic to equal Heike Drechsler's 1988 feat of earning three successive long jump titles at these Championships.

Glasgow 2019 witnessed a landmark achievement too from another Serbian-born athlete, Milan Trajkovic, who became the first Cypriot to win a gold medal at the event.

He clocked 7.60 in the men's 60m hurdles to deny France's European outdoor champion Pascal Martinot-Lagarde, who registered 7.61, a continental double.

Drechsler ended up with four European indoor long jump titles in all - and no sensible observer would bet against Spanovic, the world indoor champion and Rio 2016 bronze medallist, matching that feat too.

The 28-year-old Serbian, who had to watch last year's outdoor European final in Berlin after rupturing her Achilles tendon in qualifying, had arrived here as defending champion following her home win in Belgrade two years ago with an extraordinary 7.24m.

Her effort of 6.92m upon returning to the Serbian capital on February 20 indicated she was back in top shape and she had qualified with a single effort of 6.79m.

Spanovic's early lead of 6.90m in the final was immediately eclipsed by Nastassia Mironchyk-Ivanova of Belarus, with a personal best of 6.93m that kept her in gold medal position until the fifth round.

The battle for bronze was similarly dramatic as German European champion Malaika Mihambo's fifth round effort of 6.83m was bettered - just - by Ukraine's Maryna Bekh-Romanchuk.

"Gold was my goal," said Spanovic.

"I came here for first position and I wasn't going to leave happy any other way.

"I knew I could make seven metres easily, but I made a lot of mistakes.

"I kept waiting and waiting, but in the end I didn't need it."

Confirmation of his 60m hurdles win appeared to take Trajkovic, whose family moved to Cyprus from Serbia when he was nine years old, by surprise as he sat with his back to the advertising boards before leaping to his feet and careering over to his followers.

Mariya Lasitskene duly added the European indoor high jump title - which she last won in 2015 - to the outdoor version she won in Berlin after seeing off the lingering challenge of Ukraine's Yuliya Levchenko.

The neutral Russian registered just one failure and required two efforts to clear 2.01m, a height that proved beyond the woman who also took silver to her gold at the last World Championships.

Levchenko finished with a best of 1.99m, in front of Lithuania's Airine Palsyte, who claimed bronze with 1.97m.

Two years ago Britain's Shelayna Oskan-Clarke was beaten to the European indoor gold by Switzerland's Selina Buchel on a photo-finish, by a hundredth of a second.

Two years on the 29-year-old claimed that gold with an utterly determined display of front-running, coming home in 2:02.58 to earn a medal that was presented to her by Coe.

France's double European silver medallist Renelle Lamote, who had tracked the winner without being able to shift her, took silver in 2:03.00 over Ukraine's Olha Lyakhova, who clocked 2:03.24.

In the men’s 800m final, Spain's Alvaro De Arriba added European indoor gold to the bronze he had won two years earlier after a bold move to the front just before the bell, maintaining his position under strong pressure before finishing in 1:46.83.

Britain's Jamie Webb took silver in a personal best of 1:47.13, with bronze - in 1:47.39 - going to Mark English, the Irish runner who had been reinstated to the final after being brought down during the semis.

There was another silver for the home nation in the women's pole vault, where Holly Bradshaw cleared 4.75m in an event won by Russian neutral Anzhelika Sidorova with 4.85.

Greece took bronze - but not through Ekaterini Stefanidi.

The world, Olympic, European and defending champion only cleared her opening height of 4.65m at the third attempt and could go no higher, but her compatriot Nikoleta Kiriakopoulou made the rostrum by clearing the same height with fewer failures.

Nadine Visser of The Netherlands added European indoor gold in Glasgow to the world indoor bronze she earned in Birmingham last year as she took the 60m hurdles title in 7.68 - the fastest European time of the season.

Lane three was empty - Luca Kozak had set a Hungarian record of 7.97 in winning her semi-final, but injured her left leg in the process of bouncing back off the pads at the top of the slope past the finish.