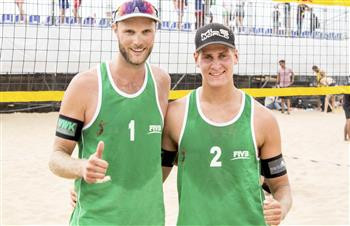 Armin Dollinger and Simon Kulzer of Germany secured their first International Volleyball Federation Beach World Tour gold medal as they won the men's event at the Vizag Open in Visakhapatnam in India.

Dollinger and Kulzer had never reached the podium at a major FIVB event before, with their best result coming when they were fourth in Shepparton in Australia last year.

Canada's Sergiy Grabovskyy and Cameron Wheelan bounced back from their semi-final defeat to Hsieh and Wang by clinching the bronze medal.

The Canadian pair earned a comfortable 21-15, 21-17 win over Japan's Hitoshi Murakami and Takashi Tsuchiya to take third spot on the podium.

Second seeds Martina Bonnerova and Martina Maixnerova of the Czech Republic also needed to come from behind to secure gold as they claimed the women's title.

Bonnerova and Maixnerova dropped the opener before they fought back to beat top seeds Chiyo Suzuku and Yurika Sakaguchi of Japan 19-21, 21-18, 15-9.