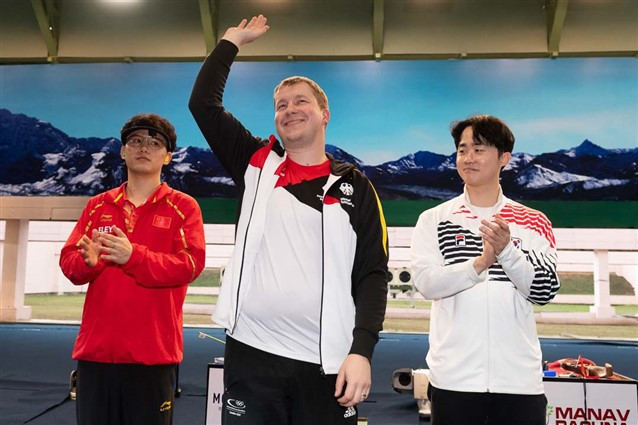 Reigning Olympic champion Christian Reitz won the men's 25 metre rapid fire pistol final at the International Shooting Sport Federation World Cup in New Delhi, after a dispute between hosts India and Pakistan meant no Olympic quota places for Tokyo 2020 were up for grabs.

The 31-year old German, who is also the world record holder, won by hitting 35 out of 40 targets.

Neither he nor Lin Junmin from China, who finished second, have gained Olympic quotas for their efforts however, after India denied visas for two Pakistani athletes hoping to compete in the event.

The controversy arose after a Pakistani militant group claimed responsibility for a terrorist attack in Pulwama in Kashmir on February 14, which killed 40 members of the Indian police force.

The International Olympic Committee responded by removing Olympic quota places for the specific event in which Ghulam Mustafa Bashir and Khalil Ahmed were due to compete, the 25m rapid fire pistol.

They also suspended all discussions with India regarding applications to host future events.

Today tensions between India and Pakistan have risen drastically as India carried out retaliatory air strikes on Pakistani territory.

Two other finals went ahead, with Hungary's Veronika Major claiming her second gold of the event.

That placed her almost seven points in front of Chinese Taipei's Chia Ying Wu, while Bomi Kim from South Korea came third with a score of 218.3.

Major already has an Olympic quota spot thanks to her performance in the 25m event, so the two berths this time around went to Wu and Kim.

In the day's other medal event, the women's 50m rifle three positions, Switzerland's Nina Christen won with a score of 457.1 points.

That saw her beat China's Mengyao Shi and Kazakhstan's Yelizaveta Korol, who scored 456.6 and 445.7 respectively.

This time the Olympic quotas did go to first and second place, as Christen and Shi each gained one for their respective countries.

Tomorrow the World Cup will come to an end with finals in the 10m mixed team events.