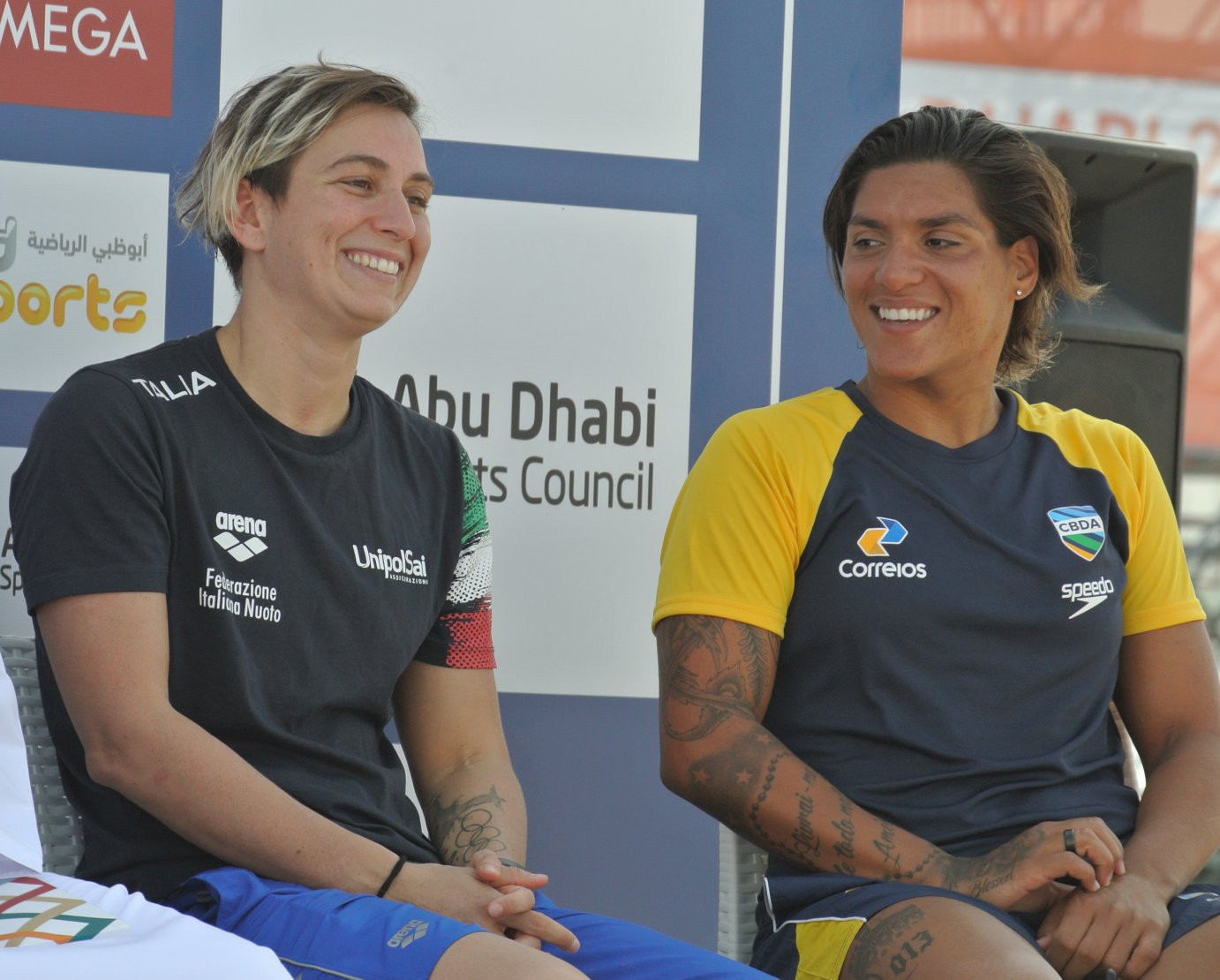 Tomorrow will see the staging of the last leg of the FINA 10 kilometre Marathon Swim World Series, while the FINA High Diving World Cup will also take place tomorrow and Saturday (November 10).

Swimmers Rachele Bruni of Italy and Ana Marcela Cunha of Brazil were on hand to share some of their feelings in the opening press conference, while Steve LoBue of the United States represented the high diving competitors.

Cunha, already the winner of the overall series ranking in the women's category, highlighted the importance of this eighth and final stop of the 2018 circuit in the United Arab Emirates city.

"The field is quite strong, as this race works as a qualification event for many countries concerning their participation at the 2019 FINA World Championships in Gwangju," she said.

"The venue is fantastic and the conditions are ideal for a great open water race."

The Brazilian has 96 points in the standings while her main challenger, 2016 Olympic champion Sharon van Rouwendaal of The Netherlands, who is also in in Abu Dhabi, has 66.

Only a maximum of 20 points are available during tomorrow's race.

"This has been a regular effort throughout the year," Cunha said.

"You win the Series if you constantly perform well.

"Despite my position of virtual winner, I will do everything possible here in Abu Dhabi to be in the leading positions."

Cunha was the champion of the series in 2010, 2012 and 2014, and she has collected nine medals at the World Championships.

At her side Bruni, winner of the 10km circuit in 2015 and 2016 and level with Rouwendaal in the 2018 rankings, added: "The venue is fantastic and the field is quite strong.

"I have trained very hard, as this is the very last race of the season and I want to perform well."

Other leading contenders in the women's category are Italy's Arianna Bridi, winner of the Series in 2017, France's Aurélie Muller, who won four medals at the 2017 World Championships, China's Xin Xin, who took gold in the previous two legs of the series in Canada and China, and Ecuador's Samantha Arevalo, who has placed third in two races this year.

Among the men, 2018 leader and 2016 Olympic champion Ferry Weertman of The Netherlands will expect to be challenged by Britain's Jack Burnell, who is second in the rankings and still in with a mathematical chance of winning the title.

Marc-Antoine Olivier of France, Allan do Carmo of Brazil, Simone Ruffini of Italy and Rob Muffels of Germany are other medal contenders.

In high diving LoBue, the 2017 world champion, said he was excited to be in Abu Dhabi once more after their organisation of the 2016 and 2017 editions of the World Cup.

"The weather is nice, and the water is flat - what else can we want?" he said.

"These are optimal conditions for high diving.

"This is the end of the season for us, after competing in a very demanding Red Bull series.

"So we turn the auto-pilot on and we try to do our best.

"The field is really strong, also with many new faces.

"Anybody can shine here, as several athletes have increased the degree of difficulty of their dives."

With 41 entries - 29 men and 12 women - the high diving competition will comprise four rounds of dives for both categories.

The male competitors will dive from a 27 metres platform, while their female counterparts will compete from a 20m board.

Challengers to LoBue are expected to include Gary Hunt and Blake Aldridge of Britain, Michal Navratil of the Czech Republic, Orlando Duque of Colombia, Alessandro De Rose of Italy, Jonathan Paredes of Mexico and Artem Silchenko of Russia.

In the women's field, other podium possibilities include Rhiannan Iffland of Australia, Lysanne Richard of Canada and Ginger Huber of the US.

FINA executive director Cornel Marculescu spoke about the strong participation in both events.

"FINA is happy to be back in Abu Dhabi -  many national federations around the world sent their best athletes in open water and high diving here," he said.

"This proves the attractiveness of this place.

"We must not forget that Abu Dhabi will host in 2020 the FINA World Swimming Championships 25m, so the success of these events is the best guarantee for a great achievement during the 2020 rendezvous."