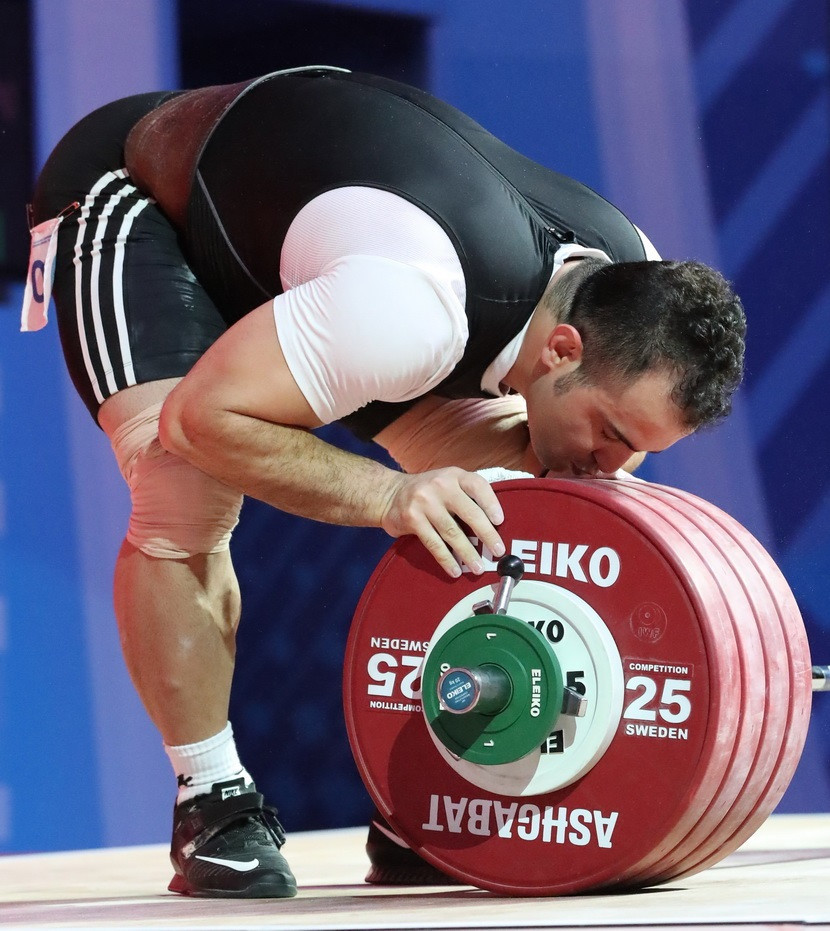 Moradi, the 94kg champion at last year’s World Championships and the 2018 Asian Games, had the opportunity to up both standards by a further seven kilograms but he failed with his final attempt at 237kg, although his trio of gold medals were already in the bag.

China’s Tian Tao was the silver medallist in the total with 407kg after finishing second in the snatch and clean and jerk with 181kg and 226kg respectively.

His best clean and jerk lift had broken the world standard before Moradi bettered it.

Tian failed with his final lift at 236kg, which, if successful, would have seen him overtake Moradi and force him into needing at least 232kg with his last attempt to win the clean and jerk and total gold medals.

Rounding out the overall podium was Romania’s Nicolae Onica with 391kg.

He finished fifth in the snatch with 175kg and fourth in the clean and jerk with 216kg.

Tsikhantsou also set junior world standards in the clean and jerk and total with 210kg and 390kg respectively.

His mark in the clean and jerk was bettered, however, by Qatar’s Fares Ibrahim E. H. Elbakh, whose lift of 217kg was enough for the bronze medal in that event.

Medals were also won today in the women’s 76kg event with China’s Wang Zhouyu topping the overall podium with 270kg after finishing second in the snatch with 118kg and first in the clean and jerk with 152kg.

North Korea’s Rim Jong Sim prevailed in the snatch with 119kg and would have won the clean and jerk and total titles had she not failed with her final attempt, and the last of the whole competition, at 153kg.

The two-time Olympic champion ended up second in the clean and jerk with 150kg and in the total with 269kg.

The overall bronze medallist was 20-year-old Ecuadorian Neisi Patricia Dajomes Barrera, who broke junior world standards in the snatch, clean and jerk and total on her way to finishing with 259kg.

It was made up of a best snatch of 117kg, which also earned her a bronze medal, and 142kg in the clean and jerk.

Dajomes Barrera twice broke the junior world standard in the snatch and total, and once in the clean and jerk.

Medals are set to be be won in the women's 81kg and men's 102kg categories.