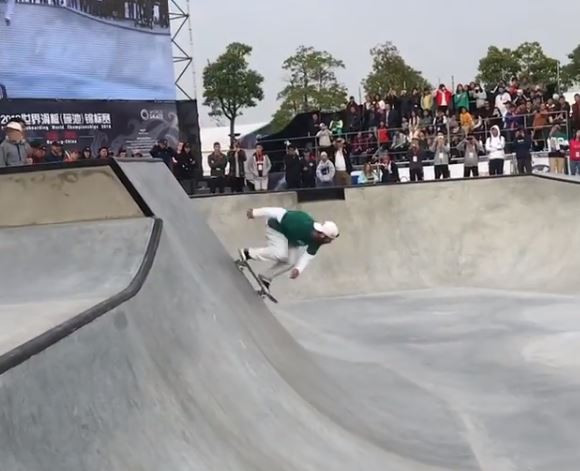 The Brazilian was hoisted into the air by his jubilant supporters at the new Olympic-certified park terrain skatepark at Fish-mouth Wetlands after producing a smooth and virtually faultless final run.

Silver went to 20-year-old Heimana Reynolds of the United States, who had finished top of the qualifying and semi-final competition, with bronze going to Australia’s Keegan Palmer.

Barros had only qualified third of the eight finalists in this World Skate event, but he found his peak form when he needed it most.

A total of 68 male skaters from 23 countries had set out to earn one of 26 semi-finals spots, where they were due to meet four Vans Park Series finalists.

Reynolds had topped the standings in the semi-final after producing an inspired fourth and final run for a total of 82.33 points which moved him ahead of fellow American Jagger Eaton, who scored 81.21.

In the final, however, he had to settle for silver as Barros, who had qualified with 78.33, peaked.

The other finalists were Ben Hatchell of the United States, Japan’s Yuto Horigome, Jaime Mateu of Spain and Vincent Matheron of France.

The event is one of the two skateboarding disciplines on the Tokyo 2020 Olympic programme.

The competition venue is located close to the SportsLab in the Chinese city, which hosted skateboarding events at the 2014 Youth Olympic Games.

Athletes competing at the World Championships will not only fight it out for world titles as they will also battle for seeding as skateboarding moves into its Olympic qualification phase on January 1.

Park and street are the two skateboarding disciplines at Tokyo 2020, where the sport will make its Olympic debut.