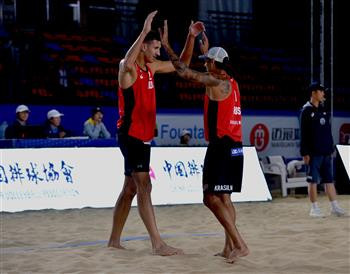 Ana Patricia Silva Ramos and Rebecca Cavalcanti Barbosa Silva of Brazil will meet April Ross and Alexandra Klineman of the United States in the women's final of the International Volleyball Federation's Yangzhou Open, with Ilya Leshukov and Konstantin Semenov of Russia playing compatriots Viacheslav Krasilnikov and Oleg Stoyanovskiy in the men's final.

It will be their second consecutive World Tour final in China following their win at the Qinzhou three-star event on October 4.

The Brazilians beat Poland's Kinga Kolosinska and Katarzyna Kolociek 21-15, 21-17 before triumphing against compatriots Barbara Seixas and Fernanda Alves 21-15, 21-19 in the quarter-final.

The semi-final saw them defeat Summer Ross and Sara Hughes of the US 21-15, 21-17 to book their place in tomorrow's final.

Opponents Ross and Klineman came up against fellow Americans Kelly Claes and Kerri Walsh Jennings, beating them 19-21, 21-16, 15-11, before recording a 22-20, 21-11 victory over Anastasija Kravcenoka and Tina Graudina of Latvia.

In the men's competition, there will be an all-Russia final.

In their semi-final, the Russian pair progressed over Canadians Sam Pedlow and Sam Schachter after Pedlow injured his ankle and the duo had to retire.

They then beat Brazilians Gustavo Albrecht and Saymon Barbosa 21-16, 21-12 to secure their place in the final.

The finals will take place tomorrow, alongside the third-place matches.