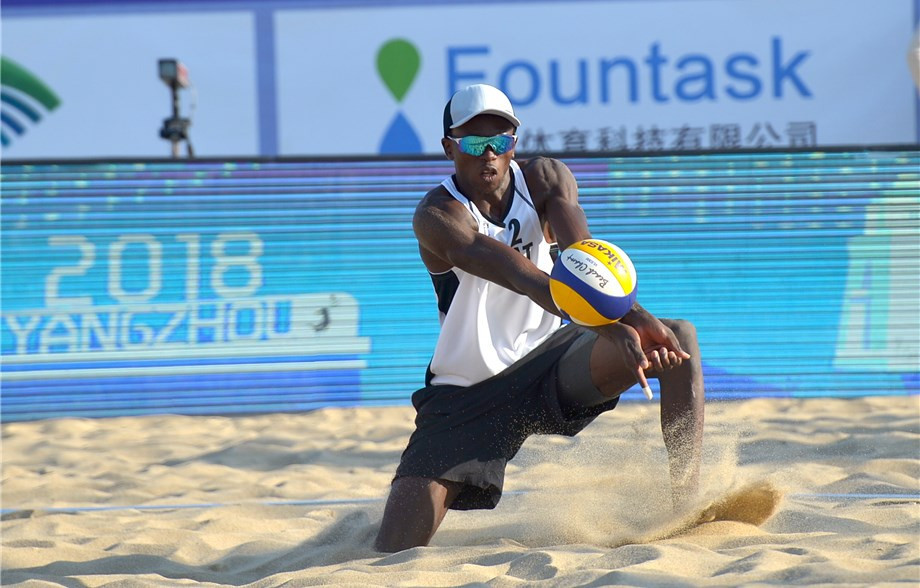 Qatar's Ahmed Tijan and Cherif Younousse were among the pairings to book their place in round two of the men's competition as action continued today at the International Volleyball Federation (FIVB) Yangzhou Open in China.

The duo made a late run in the third set to triumph 21-19, 16-21, 15-10 against home favourites Gao Peng and Ha Likejiang at the Yangzhou Beach Volleyball Sports Forest Park.

Having lost their first match in Pool A of the four-star Beach World Tour event yesterday, Tijan and Younousse started today by picking up a 26-24, 18-21, 15-8 victory over Italy's Marco Caminati and Enrico Rossi to secure a third-place finish and qualification for round one.

They then went on to win 10 of the last 12 points against Gao and Ha to set up a meeting with Canada's Sam Pedlow and Sam Schachter, the winners of Pool F, tomorrow.

"It was a good match and an important match for us," Younousse said.

"We had a bad start in the competition, so that was our wake up call.

"We had a nice fight against Italy in the morning and we also had a good one against China.

"The third set was very tight.

"We had to do something and it was sort of a go hard or go home situation, so we fought back.

"I even did a miracle ace and I think that broke their momentum."

The US’s Miles Evans and William Kolinske advanced to the second round by way of a forfeit by Ukraine’s Sergiy Popov and Iaroslav Gordieiev.

In the women’s event, the US’s Kerri Walsh Jennings showed a masterclass in finishing under pressure to overcome top Chinese pair Wang Fan and Xue Chen in their pool play encounter.

Walsh Jennings and partner Kelly Claes took the first set, but their opponents did not give up easily and fought hard to force the tie-break set.

Later in the day, Wang and Xue recovered with a 21-19, 21-17 victory over The Netherlands’ Joy Stubbe and Marleen van Iersel.

Ana Patrícia Silva and Rebecca Cavalcanti beat top seeds Barbara Seixas and Fernanda Alves 21-17, 20-22, 15-10 in an all-Brazilian clash in Pool A, while the US’s Betsi Flint and Emily Day defeated their second-seeded compatriots Alexandra Klineman and April Ross 21-18, 21-19 in Pool B.

Canada’s Sarah Pavan and Melissa-Humana Paredes, meanwhile, showed no signs of slowing down with a straight-sets 21-13, 21-15 win over Poland’s Kinga Kołosińska and Katarzyna Kociołek sealing their domination of Pool D.

Also advancing to the round of 16 after completing two wins in pool play were Russia’s Evgenia Ukolova and Ekaterian Birlova, the US’s Emily Stockman and Kelley Larsen, Switzerland’s Nina Betschart and Tanja Huberli, and Italy’s Marta Menegatti and Viktoria Orsi Toth.

Action in both the men's and women's events is due to continue tomorrow.