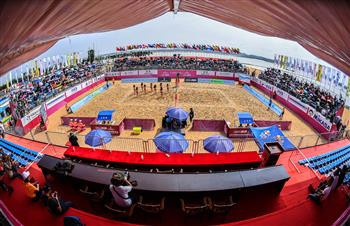 The International Volleyball Federation (FIVB) gets its Beach World Tour rolling again from tomorrow with five-straight weeks of international action, starting with an event for men and women in Qinzhou, China.

The tournament is the first three-star event of the season with only low level one and two star competitions taking place so far.

It sees the World Tour return to Qinzhou for the second successive season after pairs from Australia and Russia won the women's and men's inaugural gold medals, respectively, last October.

The first will be in China at Yangzhou from October 10 to 14, before the United States stages competition in Las Vegas from October 17 to 21.

All of the events will count towards qualifying for the Tokyo 2020 Olympic Games.

Qualifying for the Olympics began on September 1 and concludes on June 14, 2020.

The Olympic rankings will be based on the points earned at the 12 best performances as a team in the 2019 FIVB World Championships in Hamburg from June 28 to July 7, as well as FIVB World Tour events and recognised Continental Tour Finals.